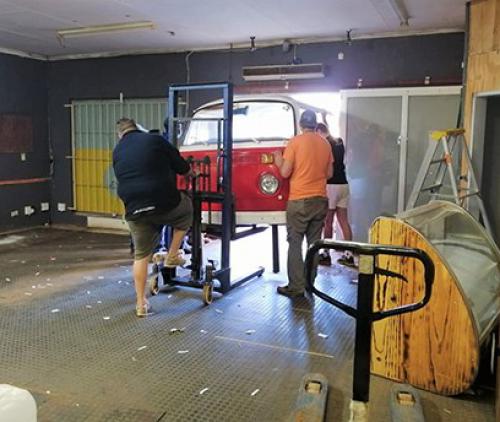 After almost 30 year in business, Pit Stop Liquor Store was forced to close its doors. Owner Frank Avian started clearing out the store a week before the second ban on alcohol sales was lifted on 17 August. Pictured are Frank and family, busy removing the well-known Volkswagen Kombi that served as pay point inside the store. Photo supplied.

Apart from the loss of life, another harsh reality of the Covid-19 pandemic is the trail of destruction it has left on economies. Especially small businesses were hit hard, with many not surviving the “culling process” brough about by the virus. One of those small businesses that did not survive was well-known family-owned liquor store Pit Stop in Louis Trichardt.

“It was with a heavy heart that the decision was made to close down Pit Stop Bottle Store, due to the effects of the recent pandemic, which has left millions of citizens unemployed and a deepening, looming depression. The spate of lockdowns has also been a large contributing factor,” said owner Frank Avian.

Many might remember the interview the Zoutpansberger had with the 67-year-old Frank just after the ban on alcohol sales was lifted on 1 June. The ban was imposed on 27 March as part of the South African government’s Covid-19 response. This left Frank without an income for just over two months and, just like many other small businesses, Pit Stop also faced cash-flow problems.

Being able to re-open again on 1 June was like a lifeline being thrown to Frank and his clients, who have been supporting Pit Stop for the past three decades. The shop was recently revamped and caught the eye with an old Volkswagen Kombi being incorporated into the shop as a pay counter. “We were closed the entire period, with no income generated. Yet there is still rent, staff and water and lights to be paid. I also draw from the business for personal expenses. It has been tough going. I have had to let two staff members go already. Fortunately, they have found other positions and they are quite happy. So, I am left with one staff member now, and we try to manage the store within the family group to try and salvage it,” said Frank at the time. He was, however, realistic about the fact that he might be forced to close his business for good, should sales not pick up or something else again prohibit them from trading.

On 12 July, the unthinkable happened for Frank when President Cyril Ramaphosa reinstated the ban on alcohol sales without any warning. More than a month later, on 17 August, the ban was lifted again, but too late to save the store.

Frank had started clearing his store a week before the second ban was lifted. He just could not continue to absorb the losses anymore. His decision to close was also greatly influenced by employee Gerda Szluha’s decision to leave Louis Trichardt. “Finally, there was the loss of ‘The Face’ of Pit Stop, Gerda, who has had to relocate to Komatipoort to attend to her ailing mom. We thank her for her loyalty and hard work. To our other worker, Abby, thank you,” said Frank.

Frank expressed his gratitude towards all those who had supported Pit Stop through the years. “A very special thanks to all our loyal customers over the past years. Without you, we would never have had the opportunity of meeting such terrific people. You will always be in our thoughts. Many thanks to Clyde, Candy, and Vincent for all their inspiration and dedication - you are all one in a million,” said Frank.