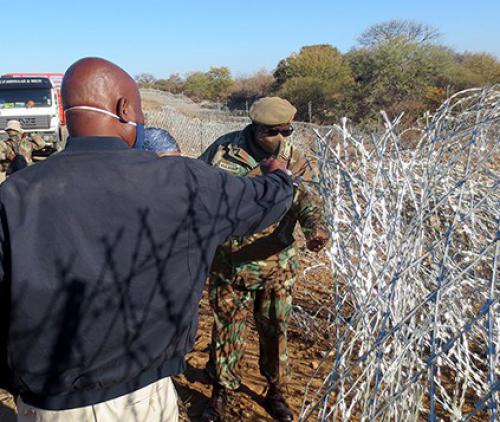 This photo was taken in June during an official inspection of the “new” border fence by amongst others the MEC for Transport and Community Safety, Mavhungu Lerule-Ramakhanya. All along the fence, damage was clearly visible. Photo: Bernard Chiguvare.

More heads are set to roll as investigations into the controversial Beit Bridge border fence tender fiasco unearths more and more irregularities, and in this regard the old English proverb that “the road to hell is paved with good intentions” rings true for the Department of Public Works and Infrastructure (DPWI).

The erecting of a new border fence, stretching some 40km east and west of the Beit Bridge border post, to protect the citizens of South Africa was one of the South African government’s first responses to the global Covid-19 pandemic. Nothing came of these good intentions, however.

From the onset, the newly built R37 million fence was marred by controversy. What soon became apparent was that the fence was of extremely poor quality, with literally everybody poking holes in it, even before it was completed.

In June, the issue of the Beit Bridge security fence was fiercely debated in Parliament. The then director-general of the DPWI, Sam Vukela, told Parliament that his department was satisfied that the fence was serving its purpose. His statements contradicted those of his minister, Patricia de Lille, who previously told the same parliamentary committee that they were receiving daily reports of vandalism and theft at the fence. De Lille also said that her department had been advised by its internal anti-corruption unit not to pay any more money to the contractor, but to wait until the investigations had been completed. She said that only R21 million of the R37 million had been paid over to the contractor. De Lille told members of parliament that the auditor-general had been asked to investigate the project. One of the issues raised by members of parliament was why a contract had been awarded to a company that had seemingly failed to deliver a proper service before. The question was also asked whether the department had received the full value of the R37 million awarded.

July saw the precautionary suspension of Vukela as more and more questions were being asked about the border project. Then, in August, came the release of a report on the investigation into the project. The report highlighted several alleged procurement and other irregularities, to such an extent that the report recommended disciplinary charges against 14 senior officials in the DPWI.

The investigation into the project by the department’s anti-corruption unit and the Special Investigating Unit further found that the government had paid R17 million more than the market-related cost for this by-now-controversial fencing project. This came to the fore during a virtual meeting of Parliament’s Portfolio Committee on Public Works and Infrastructure on Tuesday this week.

"A further assessment using market-related prices for materials actually used on site and revised fees for engineering services provides for a total project cost of R23 388 023.97. This indicates that project cost was exceeded by an amount of R17 047 891.01. It is therefore apparent that a proper review of the bill of quantities was not conducted by the department, and consequently resulted in the contract price being inflated. This also reflects the real risk to the DPWI of having failed to test the market. The 2020 market comparison also indicates that the 2016 rates were inflated at the time," said the DPWI’s acting director-general, Imtiaz Fazel.

Fazel also added that the “new” fence was clearly never effective. “On 4 and 5 May 2020, we recorded at least 115 breaches of the fence, which led to an untold number of unlawful crossings between South Africa and Zimbabwe,” said Fazel.