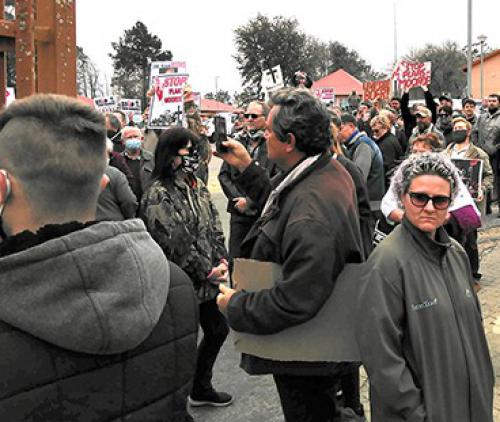 Farmers from all over Limpopo Province protested outside the Morebeng Magistrate's Court last Friday against the granting of bail to the suspects accused of attacking the Joubert couple from Legkraal on 5 August.

“Now, more than ever, we are going to protect ourselves”

“No bail! No bail!” chanted more than 50 farmers outside the courthouse in Morebeng (Soekmekaar) on Friday, 14 August. They were protesting against the granting of bail to three men accused of brutally attacking the Joubert couple on their farm in the Legkraal area on 5 August.

The three accused appeared on charges of robbery, assault, and rape. A fourth accused, Ayanda Thwanwe (33) from Kagiso in Krugersdorp, died in hospital on 7 August after being shot and wounded by police just hours after the attack on the 62-year-old Chris Joubert and his 58-year-old wife Lionise.

Acting on behalf of the accused, VW Lalumbe from Legal Aid Makhado said on Friday that he and the State had agreed to postpone the case until 21 August for a possible bail application. This was because the State had added additional charges to the case, which was only disclosed to the defence on 14 August. The identity parade had also not been conducted.

While waiting for court proceedings to start, the protesting farmers chanted “Enough is Enough!” while gradually moving closer to the court’s main gate. They were, however, told by the police to move back. This did not go down well with some protestors, who argued that no law prohibited protestors from standing at a court house’s main gate. Other protestors waved placards with the words "STOP MURDER, NO BAIL, GEEN BORGTOG", written on them.

Speaking to the newspaper, Mr Henk van de Graaf, chairman of the TAU SA, said they had expected the case to be postponed. “We expected the postponement, but we will continue to oppose bail at the next court date," said Van de Graaf

Van de Graaf said the TAU SA was extremely concerned about farm murders and attacks on people on farms, not only in Limpopo but the country as a whole. Regarding this, TAU SA warned would-be perpetrators of farm murders and attacks. "We are sending a clear message to these criminals that, if you come to our farms, the next time you may not be so lucky to come to court. Now, more than ever, we are going to protect ourselves," said Van de Graaf. He urged courts not to grant suspects in farm attacks and murders bail.

According to Chris Harmse, also a member of the farming community, farm murders in South Africa are out of control. As a farming community, he said, they were striving to create an awareness of such crimes, especially in the rural farming areas. Harmse called for the law system to take its course, so that the guilty could be sentenced.