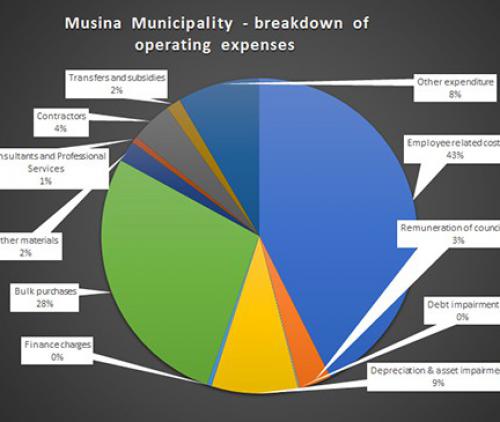 While the country suffers from record-breaking levels of unemployment, salaries of government officials and especially municipal employees have skyrocketed. The burden of employee-related costs is also starting to weigh heavily on taxpayers, with less and less money being spent on infrastructure and service delivery. Some municipalities are already spending half of their operational income on remunerating employees, councillors, and consultants.

Several labour unions are currently engaged in a legal battle with the government over proposed salary increases. The labour unions demand that the government honour a three-year wage agreement which, in the case of municipal workers, means a 6,25% increase effective from 1 July 2020.

In papers filed in the Labour Court last month, the director-general of the National Treasury, Dondo Mogajane, argues that public servants have been the beneficiaries of decades of above-inflation salary increases, outperforming private-sector salaries. “This is not just and equitable,” he said.

According to Treasury figures, tax revenue grew by an average of 7,5% annually over the past decade – but the compensation of public servants grew more quickly, at an average of 10.3% annually over the same period. Mogajane said the wage agreement had become “unaffordable, unbudgeted and unauthorised by law”, rendering it “invalid and unenforceable”.

The situation is especially worrisome when one looks at the latest budgeted figures of two local municipalities, namely Makhado and Musina.

What is important, however, is the percentage of the operating expenditure that goes towards salaries. Although no “perfect” percentage exists, ideally this figure should be close to 20%. Solly Noor, who was the chairperson of the transitional local council in Louis Trichardt in the mid-1990s, agrees that this figure should be kept as low as possible to allow maximum funds to go towards service delivery. “I tried to keep this percentage below 20% during my time as chairperson,” he said in a telephonic interview earlier this week.

To add some more misery to the situation, municipalities throughout the country apparently started spending excessive amounts of money on “consultants” over the past few years. This practice was severely criticized by the auditor-general (AG) in a report made public last month. Consultants are supposed to be used only when a municipality lacks the specific expertise, but a transfer of skills must take place.

In his report, AG Kimi Makwetu reckons officials tended to become complacent when consultants were hired and were therefore not performing the jobs they had been appointed to do. “The (Limpopo) province relies heavily on consultants, yet there are no controls to ensure that the municipalities receive a return on their investment,” the report reads.

Makwetu’s report highlights Makhado as the municipality in the Vhembe District with the largest salary bill for its finance department. This municipality spent R28,86 million in 2018/19 to pay officials, yet it had to fork out another R4,87 million to pay two consulting companies to assist.

Makhado’s budget is, unfortunately, not very clear about what is included in the category “contracted services”. This expense stood at R194,78 million in 2016/17, but fortunately went down to R138,18 million two years later and the past year it stood at R64,71 million. The projection for 2020/21 is R67,69 million.

When the three expense items, namely salaries, remuneration for councillors, and contracted services, are combined, an alarming rise is still evident, with these expenses accounting for 41,74% of the total operating expenditure in the coming year.

But Musina is worse

Musina municipality, which is the smallest in terms of population size in the Vhembe District, spends more than 50% of its operating budget on salaries, councillors, and consultants. This has been the case, however, for quite a few years.

In Musina’s case, the auditor-general picked up that this small municipality spent a staggering R8,42 million on two consulting companies last year. This almost matched the municipality’s total salary bill for its finance department (R8,84 million).

The municipalities’ budget documents are not always a very accurate means of reflecting where money is spent. Despite the auditor-general’s findings, Musina’s budget indicates that only R2,35 million was spent on consultants, which contradicts the findings of the AG.

Who takes the bulk of the money?

The municipalities all seem to be extremely “top heavy”, with senior managers taking a large chunk of the salary pot. At Makhado, the six senior managers will earn R8,92 million in 2020/21, which represents 3,1% of the total salary bill. The draft budget indicates that the municipality employed 592 permanent and six contract workers in 2019/20. The average salary per worker is expected to be R438 152 per annum.

At Musina, the six senior managers will collect R5,17 million in 2020/21. This municipality, however, also has 12 senior IDP managers, all of whom earn more than R1 million per year. This takes the total salary budget for senior managers to R25,83 million.

Musina’s 24 councillors are expected to collect R11,86 million of ratepayers’ money in the next year. The executive mayor’s salary is the highest, at R904 000 (which, incidentally, is higher than that of the Makhado mayor).

This municipality only declared 326 permanent positions and 38 contract workers in 2019/20. This means that the average salary at Musina Municipality is R400 219 per annum.