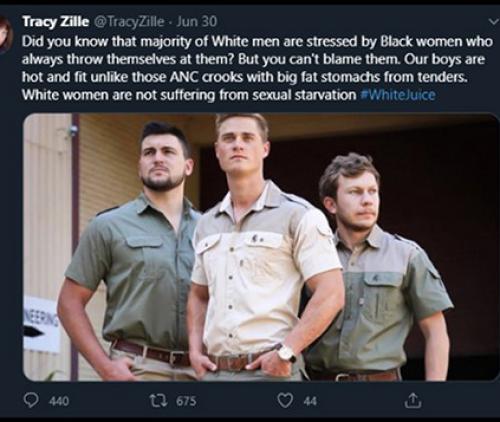 Is the “racist” @TracyZille a local EFF member?

“Whoever is behind the @TracyZille account is a coward. I will tell you straight out what my opinion is (I don’t need an alias),” said Anthony Matumba.

Matumba, a prominent EFF politician and a member of the Makhado Municipality’s executive council, was caught in the crossfire the past week after being accused of creating a fake social media profile to stir racial tension and to profit from it.

The story broke over the weekend of the person who allegedly was behind the Twitter account of one @TracyZille. The profile is seemingly that of a middle-aged white woman who enjoys racial stereotyping.

Tracy Zille became quite famous the past few weeks because of her controversial opinion on matters, especially those concerning the perceived differences between races. In several of the tweets she gives “advice” to black people on how to handle issues such as love or even hair styles. “You can go on and say @TracyZille is a racist but the fact remain. You are wearing White people's body parts (weave) on your head. You are a scam, guys spend money on Evelyn and wake up with Steven. Love your natural African hair,” says one of the tweets.

In the tweet that caused the most reaction, @TracyZille stated that white men were preferable to black men on the basis of being more fit and that black women “throw themselves” at white men. “Our boys are hot and fit, unlike those ANC crooks with big fat stomachs from tenders,” the tweet reads.

Tracy Zille, however, also went at her “fellow white people”, telling them to take cognisance of the inequalities in the country. “Blacks make 85% of South African Population and Whites make 15% of the population. But Whites own 85% of the land and Blacks own 15%. Blacks are getting buried on top of each other because of lack of land. Is that not racism? if I talk about it they say Tracy Zille is a racist”.

The @TracyZille Twitter account was created on June 29 this year, but quickly caught the attention of many who either agreed with “her” or simply found the racist opinions intriguing. By the end of last week, it had already amassed nearly 30 000 followers.

The social media account also caught the attention of the Digital Forensic Research Lab (DFRLab). This is an international group specialising in tracking “disinformation campaigns, fake news stories, covert military developments, and subversive attempts against democracy”. On its website, DFRLab states that it endeavours to “identify, expose, and explain disinformation where and when it occurs, using open-source research”.

Jean le Roux, the main researcher, analysed the @TracyZille Twitter account and noticed that, of the 104 tweets made, 61 contained links to three websites: whatsappgroup.co.za, search67.com, and jobsfinder.co.za. One of the sites, Search67.com, contains news articles, mostly written by a “Katlego Sithole” or an “Abel Mushi”. In some cases, these articles were copied from content providers such as Daily Sun and even Pretoria News. In most cases, the articles prey on sensationalism. In a tweet referring people to the jobsfinder.co.za site, @TracyZille appears to be selling fake matric certificates.

What was noticeable was that all three websites are monetized by Google AdSense and visitors get bombarded with adverts. Google AdSense is a popular way in which website owners try to make money from website traffic.

DFRLab traced the ownership of the websites to a company called Volongonya (Pty) Ltd. The address supplied is Tshiawelo Street, Tshikota, and the company only has one owner, Anthony Matumba. Matumba is a councillor at Makhado Municipality, where he also forms part of the executive council. He is a member of the Economic Freedom Fighters (EFF) and serves on the party’s central command team.

Some further research by DFRLab showed that links to Matumba’s three websites are frequently tweeted as a response to other accounts. “What this revealed was a network, mostly propagated by the Twitter account @amogelangpaswa, targeting prominent South African Twitter accounts by replying to their tweets with links to Matumba’s websites. The idea, it seems, is to draw on the large followings of these accounts as a means to amplify the reach of the websites,” the report states.

“This appears to be part of a coordinated effort to amplify the websites in questions, increasing traffic to the sites and consequently the revenue generated for the owner. The deployment of racist rhetoric as a lever to propagate disinformation serves to not only undermine legitimate concerns around race and identity, but also exacerbates existing racial tensions,” writes Le Roux.

When Matumba was contacted by this newspaper earlier this week for comment on the matter, he was quick to deny any involvement in the @TracyZille Twitter account. “I am not behind all these things. There is nothing linking me to that account,” he said.

Matumba does not deny that he is the owner of the three websites mentioned. These he started “as a hobby”, he said. He described the accusation that he enriches himself via these websites as a bit absurd. “News websites don’t make money,” he said. Google AdSense is a popular monetisation method for websites but is only effective if a site has several million visitors. “You just get a small amount of money,” he said.

Matumba admits that he markets his websites on various platforms. “I send messages to more than 5 000 people on WhatsApp,” he said. “The mere fact that other social media accounts share links to my websites is no proof. I have no control over social media,” said Matumba.

As far as the @TracyZille profile is concerned, he reckons this is the work of a coward. “I am not ashamed of my views,” he said. He is also of the opinion that @TracyZille is a pseudonym for someone else, and most probably not a middle-aged white woman.

One aspect that Matumba is quite upset about is the Democratic Alliance’s laying charges against him with the Human Rights Commission. “I know them very well,” he said, arguing that they could have contacted him, and he would have explained his involvement.

Matumba started his political career as a DA youth member back in 2010. “I helped revive the DA student organisation,” he said, reflecting back on his time as a student at Univen. In 2013, when the EFF was formed, he opted to join this political party.

On Monday the DA in Limpopo called for the immediate suspension of Matumba and an investigation into his alleged conduct.

“The deplorable tweets sparked outrage and fuelled racial divisions. This action is not only unconstitutional, but is also against the Code of Conduct for Councillors,” said Jacques Smalle, the provincial leaders of the DA. The DA believes that Matumba tarnished the municipality’s integrity by involving himself in inciting racial tension.

Smalle said that the DA had also laid charges against Matumba at the South African Human Rights Commission (SAHRC) for inciting racial tensions.

On Monday the Makhado Municipality’s spokesperson, Louis Bobodi, did not want to comment on the matter. “We are not aware of any allegations levelled against Mr Matumba who is a sitting councillor for the EFF,” he said. On Tuesday, however, Bobodi said that the matter had been referred to the Speaker of the municipality, Cllr Lindiwe Betty Mogale, for investigation.

The link to the original story on DFRLab’s website can be found below: