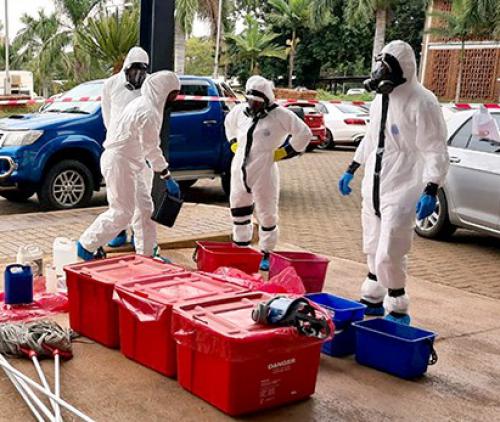 The coronavirus made its presence felt the past week and claimed its first fatalities in the Vhembe District. According to the Limpopo Department of Health’s latest statistics issued on 8 July six people have died after being infected.

The number of infections in most areas has grown exponentially. Thulamela is set to become the epicentre of the Covid-19 pandemic in Vhembe, with the number of cases soaring to 118 (73 active) on Wednesday. Three Covid-19 deaths have been recorded there.

Several businesses, schools and even municipalities were temporarily closed the past week when people tested positive for the virus. On Monday, the Vhembe District Municipality was summarily closed when a Covid-19 case was reported. The water services had to be rendered from outside the building.

VDM’s executive mayor, Cllr Dowelani Nenguda, urged residents to stay calm and not overreact to reports that someone had tested positive for the virus. Nenguda said that an employee, who had not been at work for more than a week, had tested positive for the coronavirus. The employee consulted with a private doctor and the municipality was informed. The employee is in self-isolation at home.

Nenguda said that the municipality was busy following all the health protocols by making sure that all people who had been in contact with the victim were traced, screened, and tested. At the time of our going to press, officials started to disinfect the municipal offices and all services were expected to resume on Monday, 13 July.

The Musina police station has been temporarily closed since last Thursday for decontamination after one member tested positive for Covid-19. Police spokesperson Brig Motlafela Mojapelo said all communities serviced by the police station were advised that the community service centre would be operating from the old police station building in Flax Avenue, using the main gate at the back of the current police station yard.

Classes have been suspended at Muduluni Primary school in the Kutama area as a teacher tested positive for Covid-19. The SGB informed parents on Tuesday about the situation. Muduluni is the first school in the Soutpansberg West Circuit where one of the staff members has tested positive for the virus. All pupils and teachers who had been in contact with the affected staff member had agreed to self-isolate for 14 days. After the teacher received the results and told the staff members and SGB, an urgent meeting of the SGB was called.

Consultation has commenced with the Department of Health and the school awaits the date that all the teachers and staff members will be tested for the disease. “Staff members will be going into quarantine with immediate effect, in terms of legislation. Our safety committee is working hard, in collaboration with the Department of Health, to ensure that the safety of the learners and staff is given top priority,” he said.

Since the teacher had tested positive, the school had been deep-cleaned and sanitised by a professional cleaning company.

On Wednesday, the Beit Bridge border post was reported to have closed temporarily because of a Covid-19-related incident. Trucks that were already inside the customs area were processed, but those that were still in the queue were turned back.

Earlier this week, the Department of Health in Limpopo expressed its concern about the high rate of Covid-19 cases reported in the province. Thilivhali Muavha, spokesperson for the MEC for Health, Dr Phophi Ramathuba, said that the Covid-19 cases were increasing every day at an alarming rate. Muavha said reports about health practitioners testing positive for Covid-19 were no longer surprising after the latest confirmed case of Covid-19 of an employee at Donald Frazer Hospital.

On Monday, TE Makhwanya, the acting director of hospital services at Donald Fraser Hospital, confirmed that an employee had tested positive for the coronavirus. The test was conducted outside the hospital by the patient’s private doctor. Makhwanya mentioned this during his Covid-19 response and preparedness plan progress report that was presented to the Vhembe executive mayor during his visit to the facility.

Muavha said that for an employee of a health facility to test positive for Covid-19 was no longer an issue as this was now happening all over the country, province, and districts. “Remember, we had these cases in Malamulele, Thohoyandou Clinic, Hayani and Siloam. This does not mean we will close the facility as we have patients to take care of.

“In incidents like these, we send our team to disinfect the ward or offices where such an affected person works.  If it is an office, it will be closed for a day. We also trace people who have been in contact with that person. These people will be tested and put in quarantine for 14 days,” said Muavha.

Muavha said the MEC was worried that people were now ignoring the lockdown rules. “Our people are too relaxed about Covid-19.  Some of our people are behaving as if they do not care. Some go to funerals during weekends while ignoring the lockdown rules. Some even drink and share cigarettes while they are partying. In this process, some get infected with the coronavirus.  When they come back to their workplace, they test positive and start blaming the government.

“Our people must change their attitude and behaviour. We must protect ourselves as much as we can.  If we wash our hands, wear masks in public, and keep [social] distancing, we will be safe from this virus. Before, we used to see this virus from a distance.  But now it is hitting close to home, right where we are.  Our people must know that this virus does not know class or colour.  It can affect anyone. To be safe, we must start to behave like we were doing during level five of the lockdown,” said Muavha, who also warned people to stop stigmatising people who test positive for Covid-19.