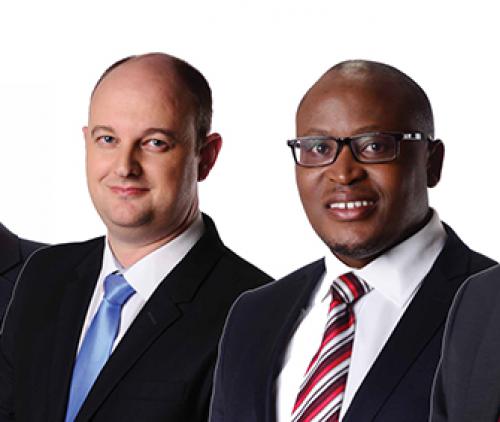 Among those arrested include (from left to right) the chairman of the board of directors Tshifhiwa Matodzi, chief financial officer Philip Truter, chief executive officer Andile Ramavhunga and Avhashoni Ramikosi, chairman of the audit committee.

Who is next in VBS prosecution sights?

The news that eight of the prime suspects in the VBS Mutual Bank looting case have been arrested was welcomed on Wednesday. The question was immediately asked as to how long it would take for the other “people of interest” to be arrested. These people include several high-profile persons, as well as municipal officials who had allegedly taken bribes to facilitate deposits into the bank.

Early on Wednesday morning, simultaneous raids were performed in different provinces by the Hawks and the National Prosecuting Authority (NPA). The bank’s former chairperson, Tshifhiwa Matodzi, its chief executive, Andile Ramavhunga, the bank’s treasurer, Phophi Mukhodobwane, and the chief financial officer, Philip Truter, were arrested. Two former members of the Public Investment Corporation (PIC), Paul Magula and Ernest Nesane, were also arrested. The two PIC members allegedly took bribes to look the other way while the looting was going on.

A former top cop, Phalaphala Avhashoni Ramikosi, was also arrested. He was a non-executive member of the VBS Board and served on the audit committee. The eighth person on the list of suspects is Sipho Malaba, a former audit partner from KPMG. Malaba signed off on the bank’s fake financial statements.

Seven of the eight suspects were reportedly taken into custody on Wednesday. An eighth suspect was not arrested as he is currently in Covid-19 isolation. No statement has been received about his identity. The eight were supposed to appear in the Palm Ridge Magistrate’s Court in Ekurhuleni on Thursday (18th).

The investigative journalism team of Amabungane reported on Wednesday that VBS’s chief financial officer, Philip Truter, had been negotiating a plea bargain for several months. He apparently offered to provide an affidavit, totalling hundreds of pages, to the NPA in exchange for limiting his own jail term to seven years under relatively comfortable circumstances. This arrangement, however, seems to have fallen through, which means that he and the other suspects may face a minimum of 15 years in jail on racketeering charges.

VBS Mutual Bank has close ties with Louis Trichardt, with their head office being situated in Erasmus Street, opposite the library, for most of its life. Many of its employees, such as Philip Truter, stayed in town and were active in the community.

Last month, the Daily Maverick ran an article detailing how Truter had allegedly participated in the looting of the bank. An investigation in 2018 by advocate Terry Motau and the law firm Werksmans provided a lot of detail about the looters’ modus operandi.

“From Motau’s investigation, it transpired that, under Truter’s watch, the bank was actually robbed into insolvency. About R2.7-billion in poor people’s stokvels and municipalities’ money was funnelled to bankers, auditors, lawyers, politicians and businesspeople, liquidator Anoosh Rooplal later found,” the Daily Maverick reported.

WhatsApp messages between Tshifhiwa Matodzi, Phophi Mukhodobwane and Truter suggest that Mukhodobwane gave instructions to Truter, with Mukhodobwane acting as Matodzi’s right-hand man. In return for his cooperation, Truter allegedly received what can only be construed as bribes totalling R5,8 million. One of the first payments recorded as being deducted from Truter’s VBS bank account was a collection payment of R15 for the Louis Trichardt congregation of the Dutch Reformed Church.

The full extent of the VBS looting is still not known. At last count, the bank was missing R2,3 billion. The biggest creditor is the PIC, which is owed almost R413 million. Various municipalities, especially in the Vhembe region, invested heavily in the bank. Makhado Municipality stands to lose R62,73 million, while the Vhembe District Municipality invested more than R311 million in the bank.

Mukhodobwane, VBS’s treasurer, previously told investigators that bribes had been paid to officials of every single municipality that had put money into VBS. Twenty municipalities invested with VBS, in defiance of the national treasury’s prescriptions. Separate forensic reports have been commissioned at these municipalities.

The other possible suspects include high-profile politicians who had allegedly played a key role in facilitating the deposits into the bank or were recipients of the looted money.