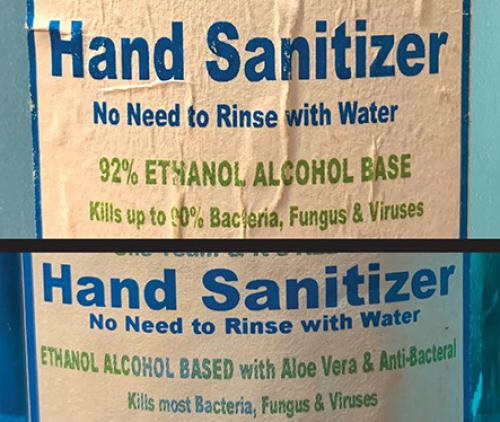 Not all sanitizers created equally

Part of the “new normal” about the worldwide Covid-19 pandemic is the compulsory use of hand sanitiser literally everywhere you go. The fact that the use of alcohol-based hand sanitiser kills off the novel coronavirus is well known, but then that sanitiser should at least contain 60% alcohol or more. However, the experiences of the past couple of weeks during lockdown have taught us that not all hand sanitisers are created equal.

Popular hand sanitisers in South Africa are those containing at least 70% alcohol. The problem is, how do you really know that what you are buying is exactly what it says on the label? The past few weeks, the Zoutpansberger has received numerous complaints from residents claiming that some people merely use a Jik (bleach) and water mixture as sanitiser. Others claim that some stores are just using a soap solution as hand sanitiser, although many believe that washing your hands with soap is even better than using an alcohol-based sanitiser. The biggest complaint was, however, of people speculating that some stores are not using the correct percentage alcohol-based sanitiser as prescribed by the government. This saw some local store owners’ being threatened with closure by the police for not using the “correct” hand sanitiser.

Last week, the Zoutpansberger received a complaint from a local resident (who preferred to remain anonymous) who claimed that he had gone to a local distributor of hand sanitiser last Thursday to buy some for his home. He said he took the government’s call to sanitise frequently seriously and wanted to make sure his family at home was safe.

The one litre of hand sanitiser that he bought indicated on its label that it had a 92% ETHANOL ALCOHOL BASE that “Kills up to 90% Bacteria, Fungus & Viruses.” “That therefore meant that, of the one-litre bottle, only 8% was water,” said the complainant.

To his surprise, however, he could smell almost no alcohol in the soapy blue mixture when he opened the bottle. He even tried to light it with a match but got no reaction. Believing that he had been sold “fake” hand sanitiser, the complainant went back to the store where the sanitiser was purchased and confronted the store manager. According to him, she was at a loss for words when confronted about the “lack of alcohol” and apparently tried to calm him down by stating that perhaps the solution was just a handwash. “I did not spend R110 to buy handwash. I asked for hand sanitiser and that is exactly what the label said … They are playing with people’s lives,” said the complainant.

The Zoutpansberger visited the store on Friday and found that similar one-litre bottles on the shelf had no labels on them, while the labels on the larger and smaller quantities of the same hand sanitiser read: ‘ETHANOL ALCOHOL BASED with Aloe Vera & Anti-Bacterial’. No mention was made anywhere on the label of the product’s actual alcohol content as was the case on the label of the bottle the complainant had bought a day before.

This raised numerous questions, the main one being what the hand sanitiser’s actual alcohol content was then?

In an effort to answer this question, the Zoutpansberger contacted the company. The company confirmed the confrontation with the complainant and added that they had even offered to refund the customer, less a handling fee, if he was unhappy with the product. The company was adamant, however, that no foul play had occurred from their side and that their products were up to standard. “The sanitiser that we have … is ethanol alcohol based with aloe vera and an anti-bacterial agent. The addition of the aloe vera and anti-bacterial makes it non-flammable. Our supplier has supplied mortuaries in Gauteng, including government mortuaries, with the products we have for over 10 years. We have supplied the three private hospitals in Louis Trichardt and various doctors with our products, all of whom were satisfied that it is a high-quality sanitiser. Our initial two deliveries were 88-92% alcohol, but due to the extreme demand and nationwide shortage of alcohol just before the lockdown, we were supplied a delivery (our current stock) with 70% alcohol,” the owner explained.

The Zoutpansberger did a rudimentary alcohol test, using a refractometer. This was followed by testing the solution with a hydrometer. In both instances, the “test” results indicated a much lower alcohol content than stated.

At this stage, many might think that the company has been “caught out”. This assumption, however, would be wrong. It turns out that rudimentary tests like these, including trying to set the mixture alight, are useless as they can in no way measure the mixture’s alcohol content accurately. This was also pointed out by the company when informed about the “test results”. “Refractometers are useful in analysing samples of two liquids where all the ingredients are known. Analysing a sample of water and sugar can fairly accurately determine the sugar content. However, our sample, according to the data sheet, also contains aloe vera gel and anti-bacterial, and the effect of the gel on the refraction in the sample is unknown. Our sample would most probably require a spectrometer to analyse,” said the company.

The above was confirmed by an “expert” in the distilling industry who best summed it up like this: “Unfortunately, I have no information on the refractive properties of aloe gel, but theoretically, yes, it could have such a big effect [difference in reading]. Long story short: there is no way you can determine alcohol content in a product with either a refractometer or an SG hydrometer unless the solution is one of pure water and pure ethanol.”

By now readers might have a better idea of just how difficult determining the true alcohol content of the hand sanitiser they use or buy can be. Crying foul until a registered laboratory can confirm a product’s alcohol content would also be unwise. In this case, the complainant believes he was sold “fake” hand sanitiser, while the company says they have no reason to question their supplier’s data sheet. “The lockdown regulations only mention that hand sanitiser must be provided at the entrance to businesses, etc. Nowhere is it defined what that is, and no specification is given in any regulation,” added the company.

Where does this leave residents in terms of having to decide which product to buy? In this regard, the South African Bureau of Standards (SABS) recently issued a press release, urging citizens to look for the SABS’s Mark of approval on products. Having said this, the SABS also warned that some unscrupulous suppliers are illegally putting the SABS Mark on their product without any verification. They advise consumers to verify whether the producers of sanitisers who claim to be SABS Approved or carry the SABS Mark Scheme number are making valid claims. Certified sanitising products are certified by South African National Standards (SANS) 490 and SANS 1853 in order to carry the SABS Approved Mark.

“The SABS has received numerous queries regarding the fraudulent use of the SABS Approved Mark on products, and while we have taken legal action against the illegal use of our Mark, we urge South African consumers to remain vigilant and not to use untested and uncertified products.  Uncertified products could be dangerous for a number of reasons, which include: adverse reactions to humans and the environment, the harmful effects of unidentified ingredients, bacterial and microbial impurities as well as simply just not being suitable for use on oneself,” said Jodi Scholtz, lead administrator of the SABS. Consumers are advised to check the certification status of companies on the SABS website.  The SABS site (https://www.sabs.co.za/Certification/certificationfilter.asp) lists all manufacturers who are currently certified by them.