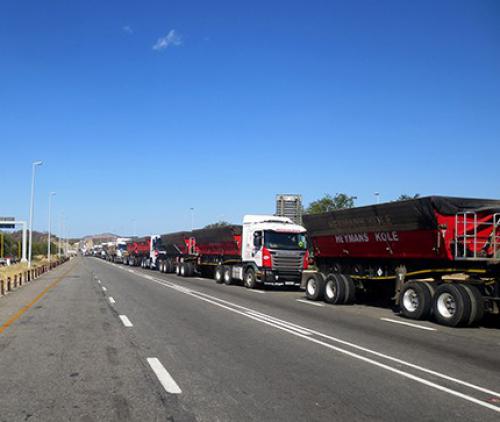 Beitbridge to become a one-stop border with steep tolls

Upgrades at the Beitbridge border post might relieve the congestion, but this may also come at a huge cost to operators of transport companies. Last week, the Zimbabwean minister of Transport and Infrastructural Development, Joel Biggie Matiza, announced that commercial vehicles would soon pay up to US$300 to cross the border.

Congestion at this border post has been a serious problem for the past couple of months. Last week, the online publication, GroundUp, reported that truck drivers have to wait for several days to get through the border post. The situation was made worse by the Covid-19 lockdown regulations.

GroundUp visited the border post on Wednesday and witnessed a queue of trucks stretching back more than a kilometre. The truck drivers had to wait for two days, but were seemingly thankful, because a week earlier the line stretched back ten kilometres and the waiting period was five days.

“I joined the queue at 23:00 Saturday evening. Now, it’s 10:00 Sunday morning. I have not moved even 100 metres. I have to keep awake … so that I do not block other drivers. Just imagine spending two days without proper resting,” Audicious Mudzviti, a driver for the Jumbo Company, told GroundUp last week.

Another driver, Frank Moyo, who has worked for the Hatricee Company for the past 10 years, said: “Before lockdown it used to be almost two hours before I crossed into Zimbabwe. Now it’s almost a week. From Johannesburg to Zambia a single trip is almost two weeks.”

He said he used to do up to three trips between Johannesburg and Zambia, but nowadays only manages one in the same period. “I have no time for my family, which is in Harare,” he said.

When the Limpopo MEC for Transport and Community Safety, Mavhungu Lerule-Ramakhanya, visited the border post last Wednesday, truck drivers were complaining about the dangers when waiting in line for days on end. They feared that criminals would take advantage of their vulnerability. “Always stay next to your vehicle,” Lerule-Ramakhanya advised drivers. She urged them to be patient.

On Wednesday, she told GroundUp: “We are still on lockdown and we have to check Covid-19 compliance with truck drivers – face masks and we have to screen them … We also have to be stricter in what we do for the safety of both the drivers and the countries they will be travelling to, hence we have the long queues.”

On the Zimbabwean side of the border post the procedure to clear people seems to be a lot quicker. The officials are also preparing for the introduction of new toll tariffs. These new tariffs were announced by the Zimbabwean Minister of Transport and Infrastructural Development, Mr Joel Matiza. The new tariffs come into effect when the upgrades to the border post are completed.

The Beitbridge Improved Border Post Project was announced by president Mnangagwa in July 2018. The project, estimated to cost $241 million, is being implemented by ZimBorders and the completion date was estimated to be 2021. It includes the construction of more commercial customs offices, the expansion of the sewer and water-reticulation facilities and the separation of traffic into sections for buses, light vehicles, tourists and commercial vehicles. The project also entails the construction of a commercial bridge, the third across the Limpopo to link with South Africa.

On the South African side of the border, plans are also underway to create a bigger and more streamlined border post. In February this year, President Cyril Ramaphosa announced four continent-wide infrastructure projects that would be fast-tracked. These projects are aimed at facilitating greater regional and continental trade.

The projects include a $14 billion dam on the Congo River, phase II of the Lesotho Highlands Water Project, the Inga III power project alongside the Democratic Republic of Congo, Namibia, Botswana and Angola, and the upgrading of the Beitbridge border post.

South African Home Affairs Minister Aaron Motsoaledi expanded on the border-post project, saying that it would be fully operational in 2024. The new one-stop border post will have separate traffic lanes for commercial, private, and public vehicles as well as a pedestrian pathway.

No cost estimate for the project was provided, as this will be borne by the private company running the operation. In his address during the launch of the project, Motsoaledi said that the master plan for the development had been finalised and the government was in the process of appointing a service provider.

“The service provider will come from one of the five consortia which were approved in 2018. These consortia are made up of construction companies and related professional services, such as engineering firms. After that, the department will finalise the contracting arrangements before construction starts.  This development will be funded on the basis of a 20-year concession,” he said.

Motsoaledi explained that two programmes will run concurrently at Beitbridge, namely the One Stop Border Post (OSBP) and the Border Management Authority (BMA). “The BMA is a cog in our social, political, and commercial interaction with our neighbours,” he said.

Five consortia were shortlisted to be appointed as the operators. They are SPG-CHEC JV, Border Post Consortium, Fast Post SA, Hlanganani Consortium and CSCEC Imbani Consortium.

Minister Motsoaledi made statistics available that indicate that the Beitbridge border post is one of the busiest on the continent. During the 2019/20 festive period, South Africa recorded a total of 6 585 617 traveller movements across all ports of entry. “This was marginally lower when compared to the 6 645 630 traveller movements we cleared in the 2018/19 festive period,” he said.