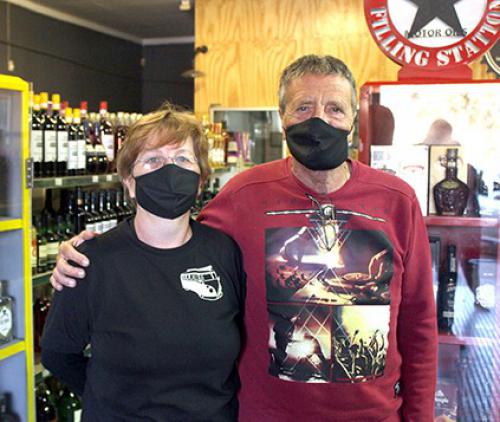 Frank Avian (right) and Gerda Szluha (left) of Pit Stop Liquor Store. Frank said a very real possibility existed that he might have to close shop for good if the situation did not improve.

The “long drought” was finally broken on 1 June when liquor stores could re-open as part of the relaxation of the lockdown regulations to Level 3. While many celebrate, however, the question might be one of too little too late for many independent liquor store owners who might be forced to close shop.

One of those independent stores is the well-known Pit Stop liquor store in Louis Trichardt. Being forced to close for just more than two months has had a very negative impact on the business’s cash-flow situation, to such an extent that owner Frank Avian had to cut his wage bill by 60% just to keep the lights on. “We were closed the entire period, with no income generated. Yet there is still rent, staff and water and lights to be paid. I also draw from the business for personal expenses. It has been tough going. I have had to let two staff members go already. Fortunately, they have found other positions and they are quite happy. So, I am left with one staff member now and we try to manage the store within the family group to try and salvage it,” said the 67-year-old Frank on Tuesday.

But the reality, said Frank, is that a very real possibility exists that he might have to close shop for good if the situation does not improve. Like many other businesses, the Covid-19 pandemic and the government’s lockdown regulations have not been kind to business sectors that had already been struggling economically before the lockdown, such as the independent liquor store industry.

“If you take into account the number of independent retailers that have been in existence for the past 30 years, the numbers are massive. With the coming of age of the chain-group liquor stores, they have got huge trading ability because of the amount of money they carry. Some of them have got 400 or 500 outlets each, so they are not only big in numbers, they also have big combined buying power. They can go to the suppliers and negotiate terms that suit them, not necessarily the supplier. So, they can go to the supplier and say: Listen here, I spend so many millions a month and I want a 90-day account for stock at discounted prices. The breweries, of course, will rather take the deal than lose the business. So, the big guys dictate to them,” said Frank.

In contrast to big business’s buying power, Frank said that small, independent liquor stores did not have that luxury. “We as independents don’t have that buying power because we are all single outlets or units that try and make it on our own. Because we do not have buying power, we pay more than everybody else for stock and it is squeezing our profit margins. Now, because you cannot charge exorbitant prices, this has resulted in a loss of profit for all independent stores,” said Frank.

Regarding the re-opening of liquor stores on Monday, Frank said that trading was good. “But in a nutshell, I could have done three times better in volume if I had the stock. That is where the problem lies. Not being a big consortium and knowing that this closure was pending, there was no way I could have bought stock in. So, now I opened the doors yesterday [Monday] with virtually no stock. People walked in asking, have you got this and that? Unfortunately, I had to tell them we are only getting stock on Thursday. People must remember, we are all cash customer. We can’t buy stock on credit like the big franchises,” said Frank.

Hennie (72) and Rita (67) van Rensburg of LiquorZone in Louis Trichardt are in a similar position but still able to keep head above water. “We also struggled to get stock. Look how empty our shelves are,” said Rita on Tuesday. “Our sales on Monday were relatively good in comparison to other stores. We did not have queues, but there was a constant stream of clients. Today is fairly quiet. But it is a mess – the economy is completely down. It is the 1st of June and people are not spending,” added Hennie.

The couple said that they were also keeping a close eye on their finances. “We are in the process of selling our farm. We will then rather rent first, just to see what direction the country’s economy is going. Luckily, we did not have to get rid of staff as we only have one staff member. We were able to keep paying salaries and we are breaking even at present. What also counted in our favour was that we [Hennie and Rita] both work here ourselves. We were also able to negotiate our rent with our landlord,” said Hennie with reference to the challenges they faced while being forced to close. For the immediate future, Hennie said he hoped business would only get better. “I am just scared we will go back to Level 4 or 5 as the number of infections increase,” said Hennie, adding that he hoped this would not be the case.

Young Louis Trichardt businessman Nardus Barnard (38) is also an independent liquor store owner. He said his business, Palm Liquor Store, had done exceptionally well on Monday. “Our sales were similar to our Easter Weekend sales. The big difference was that we were only able to trade until 17:00, as per the Level 3 regulations, and not till 19:00 like in the past,” said Nardus.

Nardus said several factors had been in his favour during the period they had been forced to close, the biggest of which was that he had not had to pay rent as they owned the building. “I also switched off all my fridges at the beginning of the period, so as not to run up unnecessary electrical costs,” said Nardus.

Also contributing to Nardus’s “record” sales on Monday was the fact that he has a license for both selling and distributing liquor. “I got the distribution license just a month before the lockdown and started a new business from scratch. I had just started trading when the lockdown came,” said Nardus. In hindsight, he said, the timing for getting the distribution license had been perfect. This was evident on Monday from the queue of bakkies lining up in front of his business to buy liquor wholesale.

Nardus added that he had detected a change in buying patterns from Monday. “Where a person would previously come and stand in a queue to by his liquor, he would now rather phone and put in an order, which I would go and deliver. It would seem people are avoiding social interaction and exercising the option: What is the easiest for me? This trend is big in the cities, but not as much in the rural areas. Here we are ‘closer’ to each other and a bit more sociable. But there is a change,” said Nardus.