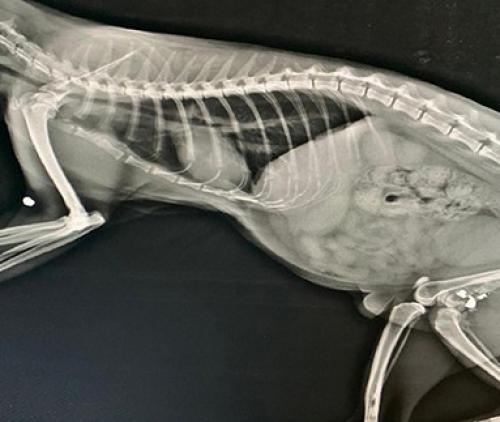 Another one of Project TNR’s feral cats was shot in Louis Trichardt the past week. In the X-ray, the projectile in both the cat's chest and one of its rear legs can clearly be seen. Photo: Projet TNR.

The past week has been a difficult and traumatic one for members of Project TNR (TrapNeuterReturn) in Louis Trichardt.

Project TNR consists of people who volunteer their time and money for the protection of feral cats. The past week, however, saw three of these cats being poisoned and another one shot.

“People must realize that cats are internationally protected. They are sentient beings with feelings. It is not okay to harm or poison them,” said local TNR member Marinda van der Walt. She was still visibly upset, following the news that the longhaired tortoiseshell cat they found poisoned on Monday had died on Tuesday evening, despite all attempts to save it.

Marinda told the Zoutpansberger that a member of the public had informed them that a number of cats had been found, possibly poisoned, on Monday. “When we went to the premises, we found one cat dead. We also found the tortoiseshell cat, which was barely clinging to life,” said Marinda. This cat was rushed to Blouberg Animal Clinic for help. Later, a third cat was found dead not far from where the first one had been found.

Marinda said that an autopsy of the first cat had confirmed that it had been poisoned. “At this stage, we cannot say where the cats were found, as the matter is subject to an investigation,” said Marinda.

Residents might also remember the story about the feral cat named Benjamin who was found shot with possibly a pellet gun on 25 April around Kock Street. Fortunately, local vets and members of Project TNR were able to remove the projectile and save Benjamin. “Benjamin is doing well,” said Marina. Unfortunately, added Marinda, they found that another of their feral cats had been shot the past week, this time on a factory’s premises in the industrial area. “The cat was shot in the chest, possibly with a pellet gun. It was also shot in one of its rear legs with what looks like a bigger calibre projectile,” said Marinda. This wounded cat was also taken in for medical treatment at Blouberg Animal Clinic.

Marinda has once again urged members of the public to refrain from harming or killings cats. “I do not expect you to like cats. All I ask is that you respect a life. These cats are on the streets because people failed to take care of their household cats by either not sterilising or neutering their cats. So please, although you might not like them, do not harm them,” pleaded Marinda. She added that cats also played an important role in the ecosystem, especially regarding the control of vermin such as rats and mice, which spread disease.

Marinda concluded that every cat deserved to be treated with compassion and care, whether it was owned or unowned. “Please read and sign the International Declaration of Responsibilities to Cats to show your support,” said Marinda. The declaration can be found via a link on their Facebook page: Project TNR Louis Trichardt.

Three of the cats cared for by Project TNR in Louis Trichardt were found poisoned on Monday. Two died at the scene, while this longhaired tortoiseshell cat was found barely clinging to life. Despite all efforts to save it, it died on Tuesday evening. Photo: Project TNR.