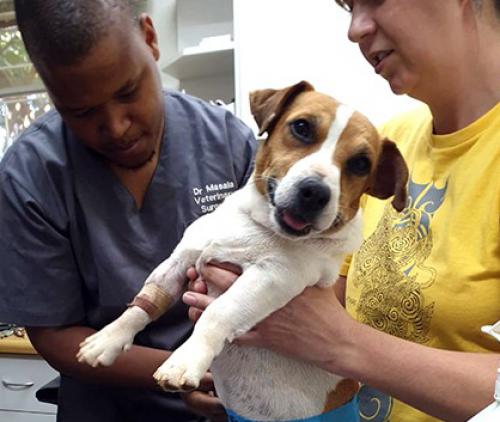 Two young residents of Louis Trichardt will soon have to go and explain in court why they fed their pet dog so much alcohol that it suffered repeated seizures overnight, leading to potential brain damage.

A case of animal cruelty was laid against the two at the Makhado SAPS the past week after a thorough investigation by inspector Lawrence Khodobo of the Louis Trichardt SPCA. The case against the two stems from an incident on 4 March where the dog, an adult Jack Russel named Nugget, was allegedly fed alcohol by the two. The severely intoxicated Nugget started suffering seizures, which prompted a member of the public to notify the local SPCA, who in turn went out and confiscated Nugget.

Nugget was clinically evaluated and tested. On clinical examination, Nugget appeared alert and responsive, but with intermittent episodes of convulsions with ataxia (the loss of control over body movements) and disorientation. Nugget also struggled to breathe. Both blood and urine samples were taken for plasma ethanol and cannabis testing respectively.

The laboratory tests found high levels of plasma ethanol in Nugget’s blood, 0,205 g/100ml blood to be exact. To put things in perspective, the legal limit for a driver to pass an alcohol test in South Africa is 0,05g/100ml (0,02g/100ml for professional drivers). One would therefore, for all intents and purposes, fail the drunk-driving test after two beers.

The laboratory report states that alcohol toxicity might likely result in metabolic acidosis (a condition in which too much acid accumulates in the body) and, to some extent, damage to the central nervous system. The report states that Nugget has “suffered unnecessarily, following repeated seizures overnight, which can potentially lead to brain damage”. It goes on to say that the long-term effects of such seizures could be severe, especially if a dog experiences repeated seizures in a short period of time.

The two residents were charged in term of the Animals Protection Act No 71 of 1962 that they had basically poisoned Nugget by pouring alcohol for the dog to drink, which can be life threatening or cause serious or permanent damage to the dog. Subsequently, the two also failed to provide or administer Nugget with the necessary treatment.

At the time of our going to press, a date had yet to be determined for the two to appear in court and they could therefore not be identified.

The above was not the only case the local SPCA has asked the court to decide over. Inspector Khodobo also opened another case of animal cruelty the past week against a woman from Manavhela Village. This after she had allegedly hacked a donkey belonging to a fellow resident of the village with a sharp object. The donkey’s injuries were so severe that the SPCA had to destroy the animal. At the time of our going to press, a court date for this case had not been determined either.