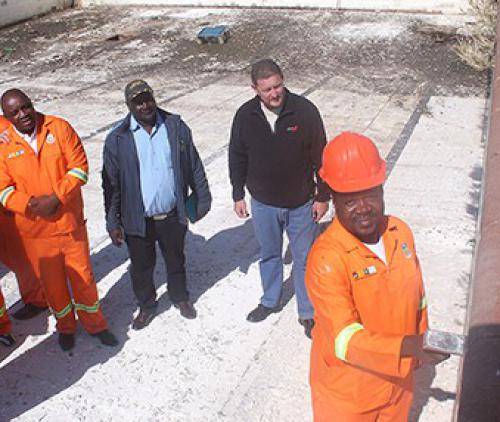 The refurbishment of the public swimming pool in Louis Trichardt was officially launched in 2014. The mayor of the Makhado Municipality, Cllr David Mutavhatsindi (right), hammer-tapped the tiles inside the swimming pool to announce the project worth nearly R500 000. Photo: Linda van der Westhuizen.

Last month, a member of the Makhado Municipality’s executive committee, Cllr Tebogo Mamorobela, was arrested for allegedly violating the Covid-19 lockdown regulations. She is accused of celebrating her birthday at a friend’s house, in defiance of the regulations. The friend, who was also arrested, is a director of several companies, some of which have received tenders or conducted business with the local municipality.

Mamorobela made the national headlines early last month when a video started circulating on social media, showing her singing and dancing at a house party, apparently to celebrate her 39th birthday. In the video, the people present can be heard mocking the national police commissioner, Bheki Cele.

The councillor and two of the people present, Harold Muswobi (50) and Khathutshelo Matshusa (33), appeared in court on 17 April and were charged with violating the lockdown regulations. They were released after paying bail of R1 000 and the case is scheduled to appear again in court on 5 June.

Mamorobela holds a very senior position in the council and, on occasion, performed duties as acting mayor of the Makhado Municipality. She is part of the executive committee, where she is Head of Corporate Services. She serves on the Standing Committee: Women Caucus and forms part of the Governance and Financial Viability Committee.

The alleged conduct of the councillor did not go unnoticed and later that week she was suspended by the regional ANC structures. She was also instructed to forfeit one month’s salary to the Covid-19 Solidarity fund. The ANC’s provincial structures then decided to terminate her membership of the party, pending the outcome of a disciplinary process.

Mamorobela was also a Brand SA ambassador, but even this title has been taken away for the time being. The Minister in the Presidency, Mr Jackson Mthembu, announced the suspension of Mamorobela from Brand SA, pending the outcome of an inquiry into her alleged misconduct.

But who is the friend?

Mamorobela’s friend, Harold Muswobi, is no stranger to councillors and officials at the municipality. He is listed as being a member or director of 25 active companies. Some of these companies have received tenders to do work for the municipality, while others have engaged in business transactions with Makhado Municipality.

One of the contracts awarded to a company where Muswobi is a member made the news headlines a few years ago. A tender was awarded to Harold Muswobi Construction to repair the municipal swimming pool in Louis Trichardt in 2014. The value of the tender was R500 000 but was later reported to have escalated to close to R700 000.

The project turned into a fiasco and an embarrassment for the council, with allegations of shoddy workmanship and delays. The refurbished pool would have been opened by 30 June 2014, but this was extended because of the problems. After the Zoutpansberger reported on the problems with the project, a statement was made that the pool would definitely reopen in September 2015.

The project was criticised in a report of the municipal oversight committee in 2017. The committee discussed the auditor-general’s report and the swimming-pool project was highlighted as one example where taxpayers’ money had been wasted. Council’s acting municipal manager at the time, Johannes Kanwendo, assured the committee that the contractor would be called back to repair the leaking pool, at no extra cost. Five years later, the pool is still not open to the public.

Questions about the fate of the pool were sent to the Makhado Municipality last week but went unanswered. When a follow-up was made on whether an answer was forthcoming later in the week, municipal spokesperson Louis Bobodi requested that questions rather be sent via WhatsApp. On Tuesday, he promised that the municipality would answer by the end of day, but, sadly, no reply on the swimming-pool issue was received.

Muswobi was contacted and asked about the reasons why the pool had never been properly repaired. “I am not allowed to discuss anything with anybody about that because, according to my knowledge, the pool was done and finished at that time,” he responded, referring all further questions to the municipality.

Another company where Muswobi is a director, Nilatouch, bought a piece of land from the municipality in 2017. The 24-hectare piece of land adjacent to the N1 was mired in controversy at the time, with environmental activists complaining that development would seriously endanger the town’s sensitive greenbelt. Objections were also received because the council had done away with the open-tender process, selling it directly after receiving an uninvited bid.

The price paid for the property, R1,368 million, was also considered to be far below market value. At the time, the developers pointed out that a lot of conditions had been attached to the sale, which had dramatically increased the cost. These included that the developers would be responsible for the cost of infrastructure, such as electrical and other connections. Such costs could effectively add several millions to the price of the property.

As transparent as a toilet window

In a set of questions sent to the municipality last week, they were asked about the tenders awarded to any of the other companies where Muswobi is a director or member. Previous reports received indicated that contracts to reseal streets had been awarded to Muswobi’s companies.

Pointing out to Bobodi that the council is obliged to follow transparent and accountable procurement processes did not help. He was also asked about the legal basis for his insistence that tenderers be asked for permission before details be made available. He did not reply.

Bobodi did respond to a question as to whether Cllr Mamorobela, as a senior member of council, had any influence over the tender-adjudication processes. He pointed out that the Municipal Finance Management Act (MFMA) prohibited municipal councillors from being members of any committee that approves tenders, quotations, contracts, or bids and from being an observer on such committees.

The Makhado Municipality, however, is not very transparent about tender processes and the manner in which contracts are being awarded. One such example is about to be debated in a court case scheduled to be heard as soon as the Covid-19 lockdown regulations are partly lifted.

The case stems from a transaction in 2019 when the council sold the park opposite the Spar complex in Louis Trichardt, next to the N1, to two bidders. In a strange decision, the tender adjudication committee decided that only one tenderer qualified for one of the two erven. This was, incidentally, also the lowest tender. The second site was not sold to the highest bidder either.

Questions about the transactions were put to the municipality but were not answered. After several unsuccessful attempts to get clarity, the newspaper resorted to filing an application in accordance with the Public Access to Information Act (PAIA). The application was completely ignored.

The newspaper then filed an appeal to the Speaker of the Council, requesting that the deemed refusal to provide information be rescinded. The appeal was also ignored, effectively showing scant regard for the laws of the country.

Court documents were filed and served on the municipality in February this year. The court was asked to make a ruling and force the municipality to comply with legislation. The municipality had until 6 April 2020 to oppose the application. This was not done, and a provisional date was set on the uncontested roll. Unfortunately, this date was within the lockdown period and the hearing could not continue. A date for a hearing will now have to be set once the lockdown restrictions have been lifted.