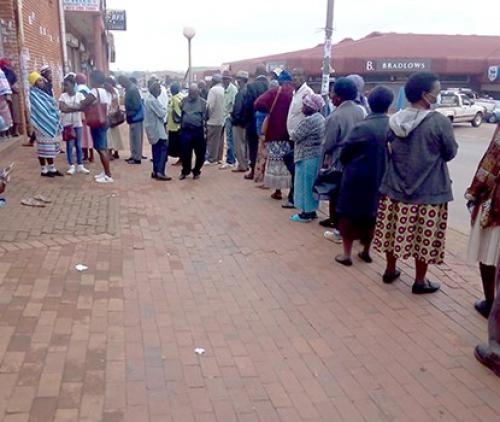 Beneficiaries were lining up from early on Monday morning in front of the post office in Thohoyandou.

Towns and business centres in the Vhembe District were busy on Monday morning, with taxis ferrying commuters to and from various areas. At face value, no lockdown was in place, and long rows of people could be spotted in Louis Trichardt and Thohoyandou’s central business district. Most of the activity was, however, caused by the earlier South African Social Security Agency (SASSA) pay-outs.

A drive through Louis Trichardt's streets on Monday morning.

On Sunday, the Transport Minister, Fikile Mbalula, announced that the transport restrictions during the COVID-19 lockdown period would be relaxed for this purpose. Taxis were previously only allowed to operate from 05:00 to 09:00 and then again from 16:00 to 20:00.

“Effective from tomorrow, 30 March, until Friday, 3 April 2020, buses and taxis will be permitted to operate from 05:00 until 20:00 in order to cater to the transportation needs of society’s most vulnerable,” said Mbalula.

Last week, SASSA announced that the social-grant payments to the elderly and disabled would be paid out earlier to help ease the lockdown restrictions. The earlier payments affect some 17 million beneficiaries across the country.

Even though the government gave the assurance that measures would be in place to reduce congestion at pay-out points, this was not evident in Louis Trichardt and Thohoyandou. In Louis Trichardt, recipients lined up for more than a block to enter the local post office. The post office staff tried their best to get the recipients to maintain some space between people, but the task seemed to be almost impossible.

In Thohoyandou, similar scenes played out in front of the post office. Very few of the elderly allowed a metre or more of space between them. Some were wearing face masks, but they were in the minority.