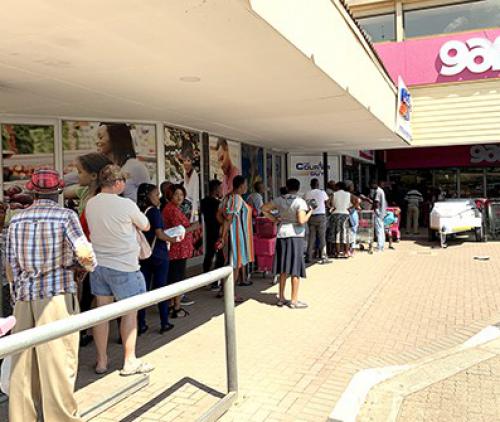 Despite calls for people to remain calm as supermarkets will remain open for the lockdown period, people still panicked. By Wednesday afternoon, queues of people has already formed outside all major retail stores and supermarkets in Louis Trichardt in a spate of panic buying. This was the scene at Game.

Hard times lie ahead for local businesses, following President Cyril Ramaphosa’s announcement that South Africa will go into total lockdown as from midnight on Thursday, 26 March.

Monday evening’s announcement has caused somewhat of a buying panic, even amidst calls for people to keep calm. By midday on Tuesday, gaps started appearing on local shop shelves, especially on products such as disinfectant, hand sanitizer and baby wipes. “On some items we had to limit people to two items per person. Some of our shelves are taking a hit, but we keep them stocked,” said Mr Luke Enslin of the two Spars in Louis Trichardt. “We have enough toilet paper,” added Enslin, with toilet paper seemingly being one of the most popular items.

As for the Tops franchise, Enslin stated that they had actually experienced more “panic shopping” as liquor stores will have to remain closed for the whole lockdown period. Whiskey seems to be the most popular choice, with Tops at Soutpansberg Spar’s Jameson shelf empty and the Bells shelf taking a knock by early Tuesday morning. “We expect the buying frenzy to increase as the lockdown date comes nearer,” said Enslin. Having said this, he added that no reason existed for people to panic. “The supermarket will remain open and we receive daily stock deliveries. Our shelves will remain full,” said Enslin.

Enslin’s call not to panic was echoed by the manager of Woolworths in Louis Trichardt, Mr Nico Lotter. “There are some essentials that we are running low on, like meat and long-life milk. Everybody is stocking up and I suspect that from Wednesday it will become busier. But we will also remain open and keep our shelves stocked, but somehow people don’t realize this or don’t know what is going on. Our trucks are going to continue to do deliveries daily. People do not need to worry,” said Lotter on Tuesday morning. By that time, his sales were almost 30 to 40% up from normal levels.

Although “essential” institutions such as grocery shops and other food suppliers, medical facilities, and fuel stations, among others, will be allowed to remain open, others are not so lucky and are forced to close for the whole of the lockdown period. Especially hard hit is the restaurant and hospitality industry. With no income generated and with bills to pay, what remains to be seen is how many such local businesses will “survive” the lockdown. As an example, hundreds of casual workers in the local hospitality and restaurant industry, such as waiters, will not receive any pay for the next three weeks as they are working on the “no-work-no-pay” principle.

For Mr Dennis Schnehage, owner of the Grasdak and Mountain Inn Hotel, news of having to shut down totally during the lockdown period comes after a week or so of an already dwindling income. “Yes, there was a definite decline in numbers, both overnight and restaurant cancellations. We thought to concentrate on take-aways, but now that won’t work,” said Schnehage.

Also being forced to shut down was the popular Mike’s Kitchen in the Makhado Crossing Mall. “There is nothing we can do. As of midnight on Thursday we are forced to close until 16 April. This is a major setback for us as a business. It is something you cannot plan for or put money aside for. This is going to affect the whole industry severely,” said Mr Jan Kleynhans, the owner of Mike’s.

Kleynhans said he had expected the President to call for a shutdown. “But I didn’t expect a three-week shutdown. As owner-manager, I can’t generate money if I am not open. If I am not open, I can’t pay my bills. It also means I cannot pay my staff, so they were all sent home until after 16 April. I will continue to pay my permanent staff, but what about my 20 waiters who are temporary workers working om commission? For the next three weeks they will have no income,” said Kleynhans. Having said all of this, Kleynhans said that he understood the President’s call for a lockdown now, rather than being stuck with a greater disaster later.

In the meantime, despite calls for people to remain calm as supermarkets will remain open for the lockdown period, people still panicked. By Wednesday afternoon, queues of people had already formed outside all major retail stores and supermarkets in Louis Trichardt in a spate of panic buying. Whether or not this will eventually prove to be the right decision remains to be seen.