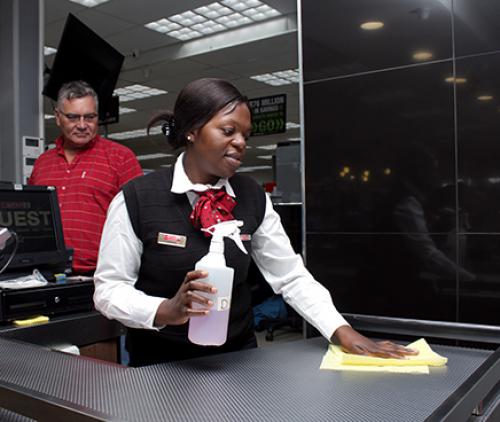 Mr Luke Enslin, owner of Soutpansberg and Louis Trichardt Spar, stands behind cashier Winny Sebola while she is busy disinfecting her paypoint. “We’ve always put a high priority on hygiene inside our stores. Only the volumes of sanitiser have increased because we’ve added additional hand sanitiser stations in the stores,” said Enslin.

Keep it clean … and stay calm

With President Cyril Ramaphosa declaring the COVID-19 pandemic a national disaster, South Africa has basically gone into total lockdown, with a ban being put on all public gatherings of more than a 100 people. This resulted in schools’ being forced to close earlier for the first-term holiday and major sporting events being postponed, such as the Premier Soccer League and Super Rugby tournaments.

Driving around in Louis Trichardt the past week one might be excused for thinking that one was somewhere in China, with more and more people walking around with face masks to help curb the spread of the virus. Clean hands seem to be priority number one since Monday as everywhere one goes one is met by office and shop staff wanting to spray one’s hands with some kind of potent hand sanitizer before admission is granted.

Talking of shops. Despite continuous calls from all spheres of government and even medical professionals in the private sector for people to remain calm, the social media were abuzz the past week with reports of people going into a buying panic. Shelves have been cleared of hand sanitizer, soap and, for some reason, toilet paper.

Louis Trichardt seem to have escaped this “mass panic” to a large extent, with shop shelves remaining full. According to Mr Luke Enslin of Louis Trichardt and Soutpansberg Spar, they are, however, experiencing a shortage of hand sanitiser. “We’ve run out of stock but still there is no reason to panic. At present, we are at a stage where we exchange products between shops. If the one gets, they exchange some with other shops,” said Enslin.

Enslin was one of the many shop owners who stepped up hygienic practices at his premises even further, following the President’s announcement on Sunday. “We’ve always put a high priority on hygiene inside our stores. Only the volumes of sanitiser have increased because we’ve added additional hand sanitiser stations in the stores. In addition, we’ve also added extra protection for our staff. Because we are using a biometric fingerprint system to clock workers in, they now have to disinfect their hands after clocking in. Because the unit itself is a high risk, we clean it every 10 minutes,” said Enslin. Attention to hygiene is, however, not something new for Enslin. “Because we are a national brand, we must adhere to the QPRO food safety standards. The pass rate is 80% for hygiene and we’ve scored 90% plus every time,” said Enslin.

Before closing on Tuesday as per government directive, local schools also implemented additional measures to keep pupils and staff safe. At Louis Trichardt High School, each learner’s hands were sanitized at his or her arrival at school on Tuesday. Thereafter, each learner’s hands were sanitized by each teacher at every class before entering the classroom. In the bathrooms, additional liquid soap and hand sanitizer were provided as well disposable paper hand towels. All sports tours for the upcoming holiday were also cancelled.

Because the COVID-19 virus is potentially fatal to people with existing illnesses, especially those affecting the immune system, the Zoutpansberg Private Hospital in Louis Trichardt in particular is not taking any chances. With immediate effect from last week they have, among other things, restricted visiting hours to once a day from 19:00 to 20:00 on weekdays and from15:00 to 16:00 on weekends and public holidays. The number of visitors has also been restricted to one per patient, with no children under 12 allowed. Surgical patients may only have one supporter on the day of the surgery, thereafter in the evenings only. Again, the use of hand sanitisers at the facility was made compulsory.

Makhado municipal spokesperson Mr Louis Bobodi said on Wednesday that, because of the shortage of sanitising materials, they had managed to provide sanitisers to all entry and pay points at the municipality. “We are awaiting a possible delivery of a full package later today, and hopefully by tomorrow morning, everything will be up and running,” he said. Bobodi added that they were also monitoring the number of people entering the municipal building as per the prescribed hygienic requirements.

As of 17 March, the National Institute for Communicable Diseases (NICD) stated that a total of 2 911 suspected cases of COVID-19 had been tested by public and private laboratories in South Africa, of which 85 were positive. The Gauteng Province has recorded most cases (45) so far, followed by the Western Cape Province (16). The 23 newly added cases consist of eight locally transmitted cases, four from the Gauteng Province, three from the KwaZulu-Natal Province and one from the Western Cape Province, with no international travel history. At that stage, the Limpopo Province had recorded one confirmed case for the past week.

The Limpopo case caused somewhat of a panic when reports on social media indicated that the case had been reported at the Louis Trichardt Memorial Hospital. The provincial spokesperson for the Department of Health, Mr Neil Shikwambana, said on Monday, however, that this was fake news. “What was communicated by the Minister and the MEC is that the person is a doctor. Whether this doctor works in the private or public sector was never mentioned. Whether the doctor works in a hospital or private surgery was not said in order to protect his identity,” said Shikwambana. According to a statement issued by the South African Ministry of Health, the 29-year-old Limpopo man had travelled to France and the Netherlands. By Monday, the total number of confirmed COVID-29 cases in the country stood at 62.

Because of President Ramaphosa's declaring the COVID-19 pandemic a national disaster and the early closure of schools and the ban on gatherings of more than 100 people, resulting in the cancellation of sporting events, school tours and even international concerts such as the one by well-known group Smokie, many might view this as a welcome “mid-year” break. Others are, however, taking the threat of possible infection seriously and restricting their movements. The message is clear – be careful but do not panic and cause mass hysteria.  For more information on the virus, how to stay safe and what to do when you suspect you might be infected, visit the NICD’s website. The past few weeks have shown that social media might not be a person’s best source of information with many fake news reports doing the rounds. A good six-and-a-half minute YouTube video to watch on how every single person can help slow down the spread of the virus, entitled Why fighting the coronavirus depends on you, can be viewed. It also explains President’s Ramaphosa’s decision to declare COVID-19 a national disaster.