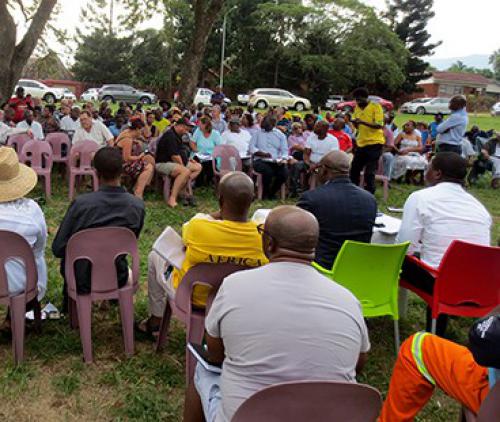 The meeting held in Louis Trichardt on Sunday was well attended by residents who wanted answers from the mayor.

“We are going to go back to our offices and come up with a fresh programme of action that is going to assist us with the concerns that you have raised. We are also going to develop a monitoring and evaluation programme, so that when we come here, we must have reports that are authentic. From now on we are going to interact with the leadership,” promised Makhado Mayor Samuel Munyai on Sunday.

Munyai made the remarks at a meeting that was called by the Makhado Crime Prevention and Service Delivery Forum on Sunday at Louis Trichardt. The municipality was to report back on the issues raised by the residents on 14 July 2019.

The mayor and his team were supposed to give feedback on the concerns raised on 8 March 2020, but the mayor requested another week to attend to the issues accordingly.

During Sunday’s meeting, residents expressed their disappointment with the progress report. Speaker after speaker complained that the municipality had not answered their concerns.

The Makhado Crime Prevention and Service Delivery Forum complained last year about the high rates and taxes in town, escalating crime, streetlights that are not working, potholes, the lack of park maintenance and the state of the local clinic. Other issues raised were the failure to clean empty stands, the lack of street names, the condition of the fruit and vegetable stalls next to the bus rank in the CBD and the dangerous bus stops along the N1.

Sam Ramanala, deputy secretary of the forum, informed residents of the timeframes when issues where to be resolved according to their agreement with the municipality. “There is no report brought back by the municipality. According to the plan, all the issues raised were supposed to be completed last year, but nothing has been done,” said Ramanala.

According to another resident, David Mudau, the municipality is taking residents in circles and no progress report exists. “We want to know what the council is doing about residents’ paying high rates. Come 2021, we are going to have elections, and I am afraid if they go without resolving these issues, the new council will say they are taking a new resolution,” said Mudau.

Elton Makhadi, another concerned resident, told the meeting that they were entitled to sue the municipality if their cars were damaged by potholes. John Madzhie said the municipality had no right to collect rates if they were not giving services to the community.

Meanwhile, the mayor also informed residents that councillors were supposed to hold meetings in their wards to inform the community of any developments. The councillors must also provide feedback to the office of the mayor.