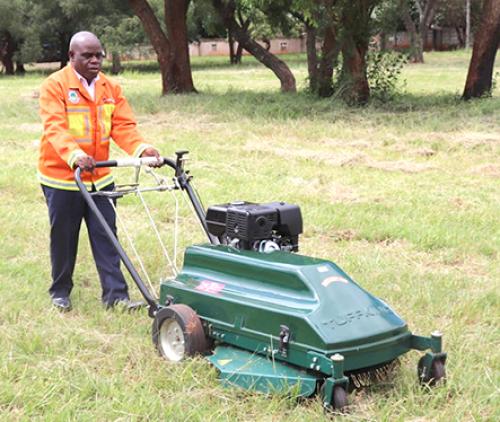 Makhado Mayor Samuel Munyai tries his hand at cutting some grass with one of the new lawnmowers acquired by the municipality. Several lawnmowers and brush cutters were handed over to the municipality’s parks team on Tuesday during the launch of a parks clean-up campaign. Photo supplied.

In an effort to help clean up and beautify parks in Louis Trichardt, Makhado Mayor Samuel Munyai officially launched a clean-up campaign in a park in Newtown on Tuesday.

“Louis Trichardt will never be the same again,” said Munyai while handing over several new lawnmowers and brush cutters to the municipal parks team, who immediately started clearing parks as part of the campaign.

Good rains over the Soutpansberg the past few weeks have resulted in overgrown parks, sidewalks and the municipal cemetery. Problems with a lack of or broken machinery caused a backlog in service delivery, with the municipality struggling to keep up with the maintenance of these amenities. This situation at the municipal cemetery spurred on several local volunteers to go and clean up the cemetery themselves over the past weekend. As for overgrown sidewalks, numerous street corners in town are at present extremely dangerous as the high grass obstructs drivers’ view, making it difficult to see oncoming vehicles at intersections. This issue will hopefully also be resolved soon with the help of the new equipment.

During the launch of the clean-up campaign, Munyai said that a programme was in place to cut the grass and keep all of the town’s 29 parks clean. "We are aware that criminals hide in our parks, terrorising our community. We are going to work hand in hand with the police to keep our town safe," said Munyai

Munyai said he would make sure that the town’s parks remained safe and clean. "Our parks team started today, and they are going to maintain all the parks in town," he said. To do this, Munyai said, having the right tools of the trade to do the job was important for the team.

During the event on Tuesday, Munyai mentioned that he would launching another programme in the next week or two to fix the town’s numerous streets lights that are not working. Some estimate that more than half of the town’s streetlights are broken at present. Plans are also afoot to start fixing the town’s pothole-infested streets. The problem was made worse by the recent good rains across the region.