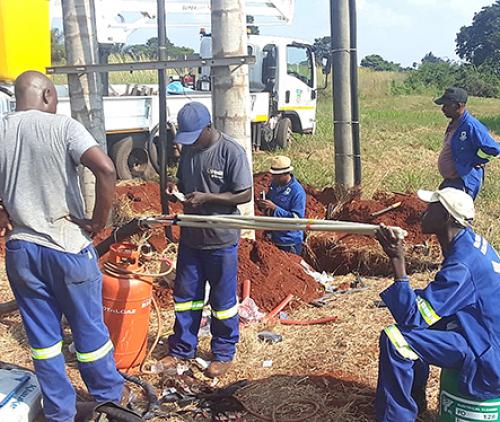 The past weekend was not an enjoyable one for many residents of Louis Trichardt, with some being left without electricity for almost 20 hours on Saturday.

Another round of load shedding sparked the problem when mindless copper-cable thieves tried to steal copper cables at the Stubbs Street substation during Saturday’s 01:00 to 03:30 load shedding. Although they failed in their endeavour, they did cause the municipality and residents a lot of frustration.

From early morning already, one could hear countless generators run non-stop in especially Newtown east of the N1. Throughout the morning, most hoped that the power supply would be restored soon, but in the end, residents had to refuel their generators more than once. The municipality did eventually manage to restore the electricity supply just after 22:00 that night, although numerous secondary electrical faults were reported across town. This included households north of Stubbs Street not running on all electrical phases. This resulted in televisions and equipment not working properly and lights burning dimly.

Makhado municipal spokesperson Mr Louis Bobodi confirmed this week that the attempted theft had resulted in a problem with the power supply to Extension 2, 4, 7 and 9, all of which are connected to this substation. When asked why it had taken so long to restore the power supply, Bobodi said this was because of the amount of work they needed to do. “Four activities were carried out until the power was restored. It took less than an hour to find where the cause of the power failure was, then followed organising and preparing the area to join [carefully digging a trench of 0.8 metres wide, one metre deep en four metres long], joining the cable, and connecting terminals,” said Bobodi.

The incident on Saturday and the municipality’s inability to respond quickly once again highlighted the dilapidated state of Louis Trichardt’s electricity network as a result of poor maintenance and lack of upgrading.  In February 2017, the town’s available notified maximum demand (NMD) was already at 44 mega volt amp (MVA), with the demand almost maxed out. In June of that year, the municipality applied to Eskom for an increase to 66 MVA. At this stage, no certainty exists about what had happened to the municipality’s application, but judging by the state Eskom is in, nobody would be surprised if the increase was not given. That the situation is bad is clear. In April last year, a report from the municipality’s technical department indicated that Makhado required 55MVA of electricity at that stage.

Asked whether residents could see the lights go off (and not during load shedding) because of a lack of electricity, Bobodi said yes. “We need more power transformers for more reliable power-supply options,” said Bobodi.

Regarding the above, a very definite fear exists that a failing electrical infrastructure could see residents go for days and even weeks without electricity when the system collapses. When asked if this was a possibility, Bobodi responded: “We have not internally done that assessment yet.” He added, however, that they would try and avoid such a situation. “Effective routine maintenance plans are in progress and may be implemented in the near future,” Bobodi said.

The attempted theft and resulting 20-hour blackout also highlighted the argument once again that load shedding gives criminals the perfect opportunity to steal copper cables. Bobodi was asked if they had experienced an increase in copper-cable and infrastructure damage during the past few weeks’ load shedding. “We are having sporadic thefts all over. Another recent one happened three weeks ago when thieves tried to steal the cable at our Boom Park substation during the load-shedding period. It also took the whole day before we could restore power to the substation,” Bobodi said. As for Saturday’s incident, Bobodi said the matter had not been reported to the police because the criminals had not actually stolen the cable.

Residents’ frustration with the municipal call centre over the weekend is another sore point. Several people voiced their dismay with the municipality’s call centre on social media, saying that nobody answered at the centre and nobody phoned back if one left a message. Bobodi explained that the high volumes of electrical faults and subsequent fault reporting had made it difficult for them to cope. “The faults volume was too much for electricians to fix as swiftly as expected,” said Bobodi.