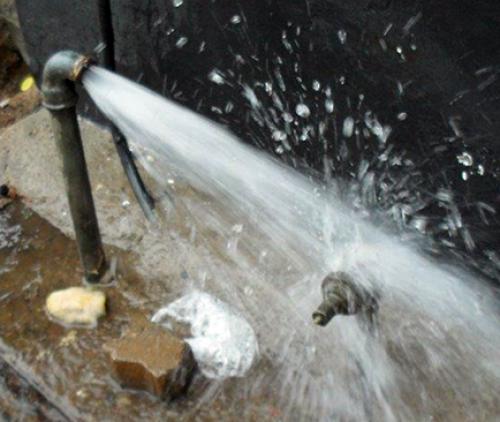 Millions of litres of precious water are going to waste because water meter are being stolen in Louis Trichardt. This leak was caused when the water meter was stolen at a premises in Burger Street. Photo supplied.

Louis Trichardt has been plagued by a spate of water meter thefts at homes and businesses the past two weeks and the Vhembe District Municipality (VDM) is struggling to keep up with the replacement of these stolen water meters.

The past weekend the situation became so bad that the VDM had to suspend the water supply to Louis Trichardt because of the thefts. “Water supply has been stopped due to the theft of water meters in Louis Trichardt Town. Vhembe technical team is assessing the situation and water supply will resume at 14:00 in the afternoon today. The theft of water meters has resulted in serious loss of water in the town. We apologize for the inconvenience caused,” reads a statement issued by the VDM on Sunday.

What seems to be causing a bigger frustration than the actual theft of the water meters is the municipality’s seeming lack of response. Mr Ronald Mkoki of Douthwait Street told the newspaper on Wednesday that he had noticed that his water meter had been stolen last Friday. He reported the matter through the Makhado municipal call centre and on Saturday the municipality came out and closed the leak. “Up till today, I am still without water. My meter has not been fixed and every time I phone the municipality, I get an arrogant response. My wife and I were even told that we could complain to whoever, nothing would come of it,” said Mkoki.

Similar frustration was experienced by Ms Elize Venter, who acts on behalf of a couple of local rental and leasing agencies. When water meters were stolen at several of their rental properties, she phoned the VDM and asked if they could do anything to protect the water meters. She was told very abruptly that they were not allowed to tamper with the meters in any way, as the meters belonged to the municipality.

As far as could be determined, the thefts occur throughout town, including Eltivillas, and the thieves do not discriminate between private homes, flats or businesses. What had sparked the thefts is uncertain and whether this is the work of one person or a group of people, but indications are that the meters are stolen purely for their scrap-metal value.

Mr Moses Shibambu, spokesperson for the VDM, confirmed on Wednesday that they were in the process of replacing the stolen meters. He said that they had replaced 22 meters already, which included repeat cases.

In several instances, the brass meters were replaced with “plastic” meters. “We are not replacing them with cheap meters,” said Shibambu, indicating that the meters were being replaced with SANS 1529-1:2006-approved polymer domestic water meters.

As for the “slow” pace at which the stolen meters are being replaced, this might have something to do with available supply. Shibambu said that they did not have enough replacement meters in stock, but that they were busy with the procurement process to acquire an additional 1 000 meters for this financial year.

The question many readers might ask themselves is what is being done by the authorities, such as the police, to curb the spate of thefts. When asked about this last week, Shibambu said that the matter had been reported to the Makhado police. In response, local police spokesperson Constable Iren Radzilane said she could find no record of any such case reported by the VDM. She said she could only find record of individuals’ reporting the thefts. When asked for a case number under which the thefts had been reported, Shibambu stated on Wednesday: “Our team has reported the case; however, the SAPS has not opened a case as they wanted to go to the scene and they didn’t have vehicles.”