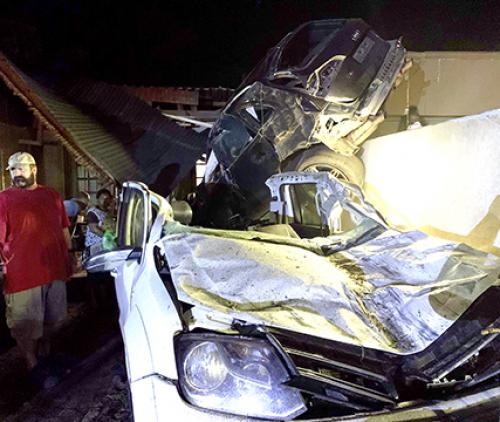 Absolute carnage! On Saturday morning, the streets of Louis Trichardt were abuzz with news of this high-speed crash, the likes of which residents have probably never seen before. Some estimate that the driver of the black Audi Q5, dangling precariously on top of the Amarok, must have been doing at least 180km/h when the driver lost control and crashed into Henk Jacobs’s house in Louis Botha Street. Photo supplied.

On Saturday morning, the streets of Louis Trichardt were abuzz with the news of a high-speed crash the likes of which residents have probably never seen before. Some estimate that the driver of the black Audi Q5 that crashed into a house in Louis Botha Street must have been doing at least 180km/h when the accident took place.

For homeowner Henk Jacobs, the Audi Q5's crashing into his house and landing almost on top of his roof just after 23:15 on Friday, 24 January, is probably the worst birthday present ever, as he turned 34 that day.

“Two of my sons, Fourie (6) and Stefan (7), fell asleep on the living room couch in front of the television. My wife, Doraine, and I had just gone to bed when I heard a crashing sound and then another. When I heard a third crashing sound, I realised something was coming for us. I pushed my wife off the bed into the corner. I was scared, because just recently we had spoken about the possibility of someone crashing into our house. But, I thought, that would be a physically impossible task with all the obstacles such as trees in the park opposite my house. Obviously I was wrong,” said Jacobs.

After the third crashing sound, Jacobs was already on his way to the bedroom door. “As I reached the door, there was a final deafening crash and then absolute silence,” said Jacobs.

Nothing could prepare Jacobs for what he saw when he opened their bedroom door. “Stefan was already sitting upright while Fourie was still waking up. When I saw all the glass shards and wood splinters, I just shouted to them to stay put!” said Jacobs.

Jacobs knew something terrible had happened. “I did not want to expose my family to the sight that might be waiting for them behind the front door. It was absolutely quiet outside,” said Jacobs. He therefore took his family to safety outside their home through the backdoor.

Jacobs said that he was highly impressed by the emergency response he received. “By the time I got to the front of my house, members of the Soutpansberg Town Watch were already on the scene. At that stage they had already contacted the police, who were also there in a flash, as were the ambulance services,” said Jacobs.

Only when Jacobs got to the front of his house could he see the true extent of the devastation caused by the crash. The Audi Q5 had completed sheared off Jacobs’s double-cab Volkswagen Amarok’s roof and trali frame at the back, basically completely trashing his bakkie, which he had bought second-hand four months ago. “For me, the bakkie was new with low mileage,” said Jacobs.

The Audi Q5 was left dangling precariously on top of Jacobs's bakkie after it had hit the top section of the house, dislodging a major part of the roof. Parts of the Audi were scattered everywhere, with one of the Audi’s wheels completely ripped off, driveshaft and all.

By some kind of miracle, the driver of the Audi was still alive. Not only was he alive, but he was also fighting fit. “In front of witnesses he kept on swearing at me, telling me I could not tell him what to do. He was trying to get out of the wreckage despite my telling him to remain in the car and wait for the rescue workers to remove him, or else he might hurt himself further. To me and others on the scene it looked like the man was severely intoxicated,” said Jacobs.

Jacobs was in for a long night. The man and the wreckage of both vehicles were removed and, by 03:00 the next morning, Jacobs was still filling in police forms.

On closer inspection, Jacobs realised just how lucky he and his family had been. When viewing his security camera footage, he saw that the Audi had actually been airborne and upside down when it flew from his gate and collided with his Amarok. Was it not for the Amarok, the Audi would have ploughed into his living room, probably killing both his sons. The wreckage of the Audi ended up a mere four metres from where they were sleeping. All that separated the two boys from the Audi was a wooden window frame. The family dog, Coco, was just as lucky to survive. On the security camera footage he can been seen lying in front of the front door. The next moment he jumps up and, seconds later, the steel frame of the bakkie and car parts fly into him. By all accounts it looks as if there was no way for Coco to have survived, but he did, only sustaining minor injuries.

“I do not want sympathy for what had happened to us. All I want is for the municipality and other law-enforcement authorities to realise the serious nature of drunk driving and speeding in our town. Must somebody die first before they do something, such as putting speed bumps at every single stop street, forcing people to slow down?” asked Jacobs.

The past week, South Africans heard about the man clocking 308 km/h on the N1 in Midrand and posting a video of it on social media. Authorities were quick to track the man down and arrest him at a funeral in Limpopo. Judging by the speed the Audi driver was doing, several residents expressed the hope the authorities would prosecute this driver with the same vigour.

Asked about the accident, the Makhado police referred all questions to provincial police spokesperson Brigadier Motlafela Mojapelo in Polokwane. Among the questions asked were whether blood was taken from the driver to determine his blood alcohol level at the time of the accident and what the driver was being charged with.

This is where the story gets even more interesting. Mojapelo responded on Tuesday evening by stating that the speed the driver was driving would be determined by the unfolding investigation and also confirmed that blood samples had been taken from the driver. “Whether or not he was intoxicated will be determined by the blood test results,” said Mojapelo.

Mojapelo then stated that the man was only being charged with reckless and/or negligent driving and not drunk driving. The newspaper immediately wanted to know why the man was not also charged with drunk driving, to which Mojapelo responded: “We are currently conducting internal investigations to find out why this was not the case as the blood was taken.”

Mojapelo was also asked when the man, who was treated for light injuries and discharged, would appear in court. It would seem that this will also take some time. “He will only appear in court if the Public Prosecutor decides to prosecute. Cases of this nature are first considered and, in the case of drunken driving, prosecutors only decide whether to prosecute or not after receipt of blood samples,” said Mojapelo.

At this stage, the newspaper cannot reveal the name of the 23-year-old driver as he has not appeared in court yet. Mojapelo did, however, confirm that the vehicle belongs to the young man’s parents and that he did have a valid driver’s licence. The newspaper is sure to follow this case closely.

In the meantime, Jacobs again expressed his gratitude towards the police at the scene, town watch members and ambulance services for their quick response. He again urged the municipality to put speed bumps at all intersections to prevent people from getting killed.

Henk Jacobs (34) with their beloved family dog, Coco. Coco took the full force of the crash but fortunately walked away alive.

According to eyewitnesses, the driver of the Audi Q5 came racing down Krogh Street in a northerly direction, skipped the four-way stop in Stubbs Street, hit the curb in Forestry road (1), demolished a concrete dustbin (2), hit a tree (3), started to role and got airborne (4) after finally crashing upside down into Jacobs’ house.

The aftermath of Friday evening’s crash. Severe structural damage was caused to the house due to the crash, including major damage to the roof against which the Audi ended up. Photo supplied.