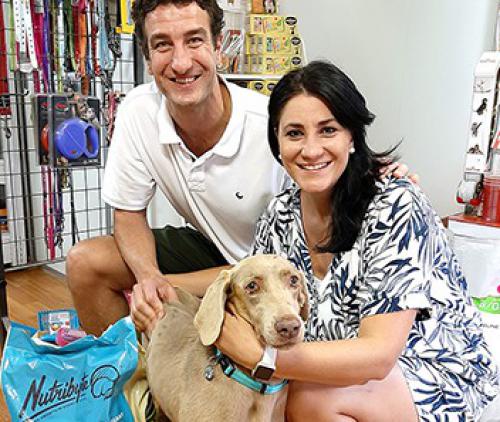 A happy Ilse and Johan du Plessis pictured with "May", whom they adopted from the Louis Trichardt SPCA. Photo supplied.

On 7 December last year, Mabel, a seven-year-old Weimaraner, joined the family at the Louis Trichardt SPCA. Sadly, she and two fellow dogs were surrendered to the SPCA after their owner moved into the local retirement home and could not take them along.

The Louis Trichardt SPCA team immediately put her and her two friends up for adoption. “Mabel is a docile, friendly girl and gets on well with other dogs too! She is super intelligent, gentle and sensitive and would make a doting, loving companion. There has to be someone out there who will fall head over heels for this beautiful girl and who can offer her a home filled with love, where she can live out her golden years!” wrote the SPCA on their Facebook page.

Sure enough, it was not long before a couple showed interest in her. Ilse and Johan du Plessis from Pretoria saw Mabel’s post and decided there and then that her next home would be with them.

The Du Plessis couple wasted no time in getting to Mabel, turning their road trip from Gauteng into an adventure.  On 11 January, the couple jumped into their car and drove all the way from Pretoria to Louis Trichardt to adopt Mabel. They even got back in time to show her around her new home before the sun went down.

While Mabel is sure to enjoy her retirement peacefully at her new home, her two companions are still waiting patiently to be adopted at the local SPCA.