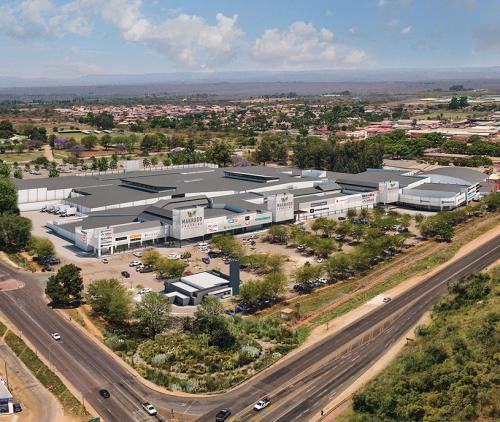 An artist's impression of the new Makhado Crossing mall upon completion. Image supplied.

News of the liquidation of the main contractor at the new Makhado Crossing Mall sent shockwaves through the local business community the past week. CMC Koch Konstruksie filed for voluntary liquidation during December, effectively leaving debts of several millions of rands in the local economy. The fear exists that many of the smaller sub-contractors and suppliers will not be able to recover from this loss and may also close their doors.

CMC Koch Konstruksie belongs to two brothers, Carl Francois Koch (47) and Charles Martin Clemons Koch (50), originally from Polokwane. The company was appointed as the main contractor to extend the Makhado Crossing Mall. When the project was launched, the estimated development cost was almost R400 million.

The developer of this new state-of-the-art mall is the Masingita Group of Companies, in partnership with Investec Properties. The holding company that was formed is Italite. Italite responded to media enquiries this week and said that news of CMC Koch’s liquidation had also come as a shock to them. They were, however, quick to point out that this would not affect the development project and that all nominated sub-contractors had been paid in full. “Under the selected sub-contract agreement, there is a contractual provision for when the main contractor fails to make payment to them that the employer and principal agent can make direct payment,” said Italite in their response.

When did things start going wrong?

According to Italite, CMC Koch started showing signs that they were experiencing financial difficulties in May 2019. They explained that the main contractor could appoint sub-contractors to do specialist work on the project. In terms of the agreement, the selected or nominated sub-contractors are covered by a provision that allows the developer to pay them directly, should problems arise. A total of 32 selected sub-contractors were used, all of whom have been paid in full for work done.

These contractors were not protected

The contract agreement, however, did not protect the other suppliers and contractors appointed or used by CMC Koch at their own discretion, without the involvement or approval of the developer, and these are the contractors and suppliers who did not get paid by CMC Koch. “Unfortunately, Italite has no knowledge or access to the agreements between CMC Koch and its creditors,” said the company.

From what could be established, CMC Koch started using several local contractors and suppliers at the end of 2019. Credit was extended to the company, but when it came to making payments, CMC Koch had many excuses. The credit included advance payments from the developer to CMC Koch, the last of which was made on October last year to help CMC Koch pay their creditors and suppliers. This advance payment of just over R2,9 million was per CMC Koch’s own request for assistance. The money was paid over, but whether any of the “non-approved” sub-contractors were ever paid remains unclear.

On 12 December, Lindy Pretorius, on behalf of Clemens Koch, wrote to one supplier, saying that the lack of payments was due to a “misunderstanding” with the interpretation of the agreement between CMC Koch and the developer. “…our retention deduction payment was expected after the launch date of the mall, being 22 November 2019, after which we could have settled most of our outstanding amounts. Unfortunately, as per our oversight, retention will only be released on practical completion by end March 2020, this realization came as inconvenient to us as to you,” wrote Pretorius. She mentions in the letter that the company is experiencing cash-flow problems and will not be able to make immediate payment.

On the same date (12 December) CMC Koch, however, filed for voluntary liquidation in the High Court. The 12 December date is reflected in CIPC records, indicating that the status of the company then changed. Two joint liquidators, Kobus van der Westhuizen and GNL Moabelo, were appointed. “The company and the estate of the company is now in the hands of the liquidators and no further payments can be made by the directors of the company,” reads a letter sent by CMC Koch’s attorney, Johan Snyman of Diamond Inc Attorneys, to creditors.

Whether the developer was made aware of the fact that CMC Koch had filed for voluntary liquidation on 12 December remains uncertain, as they continued to receive payments from the developer. “Currently, to all 32 sub-contractors as per the December payment certificate there is zero money outstanding. As for domestic suppliers and creditors, we cannot comment as we have no knowledge of this. What we can say is that all work executed by the main contractor and completed by him in accordance with the contract in the BOQ (Bill of Quantities) has been valued by the quantity surveyor and certified by the principal agent and paid in full by the 18th December to CMC Kock,” said Italite in their response.

“I would estimate that local contractors lost about R5 million due to CMC Koch’s failure to pay,” said one supplier from Louis Trichardt, who was directly appointed by CMC Koch and did not get paid either. Another contractor the Zoutpansberger spoke to said that he estimated that several contractors from Polokwane also faced the same problem of not getting paid.

The Zoutpansberger tried to get comment from CMC Koch, asking them to explain to the sub-contractors and suppliers what had gone wrong? The questions were sent to the company’s attorney, Johan Snyman, who referred the questions to Van der Westhuizen, the company’s appointed liquidator. Van der Westhuizen, however, was of little help. “I am meeting with the directors of the insolvent estate this coming Friday and will commence my investigations and duties in terms of the act. At this juncture, and despite the fact that I will obtain certain information in the execution of my duties as provisional liquidator, I doubt whether or not I will be able to share this information with you for publication in the newspaper or in any other public sphere for that matter, prior to the conclusion of my investigations and institution of possible actions against identified parties in terms of the provisions of the Insolvency act and Companies Act. I am not prepared to litigate by way of public publications in newspapers…” Van der Westhuizen stated.

Although Makhado Crossing officially re-opened in November last year, some outstanding contracts are still to be finalized. These include the relocation of the squash court and gymnastics hall. Asked how their main contractor’s liquidation would affect the proposed relocation of these sporting facilities, Italite responded by saying: “It does not affect the work as this would be a separate contract still to be tendered and appointed for completion by September 2020.”