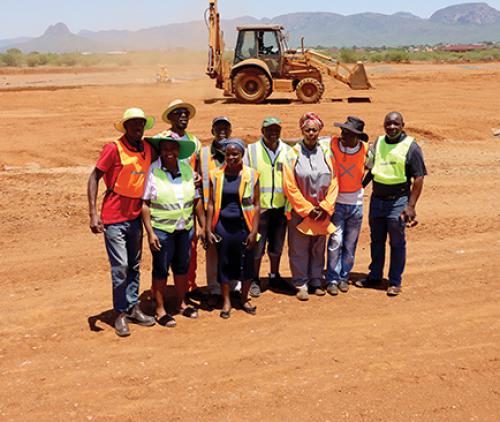 Part of the project team, along with traditional leaders and councillors at the construction site.

The stadium of dreams is taking shape, but slowly

“The hills over there are where we did the speed training. You need to train when it is hot. The extreme conditions cause the lungs to have endurance,” explained coach Makonde Makhumisane. Makhumisane was referring to his former athlete, Olympic silver medallist Mbulaeni Mulaudzi, who used to train in this mountainous area. The coach was standing on the construction site at Muduluni where a state-of-the-art athletics stadium will hopefully be erected soon.

In January 2018, the provincial manager of the National Lotteries Commission (NLC), Mr Matsobane Legodi, announced that a stadium would be built at Muduluni to honour the late Mulaudzi. The NLC will be funding the project to the tune of R15,9 million. During the sod-turning ceremony, amidst the dignitaries and politicians, he promised that the stadium would be completed by the end of June 2018.

Now, almost two years after the NLC representative had made his unrealistic promise, the first phase of the stadium is taking shape. Currently, little more than the groundworks are visible. In the one corner of the site is a completed combi-court, one of the four that need to be built.

“We are doing our best to make sure that it happens,” said Israel Ramambila, the project’s liaison officer, during a site visit three weeks ago. He explained that the new stadium will have an eight-lane synthetic track, surrounding a grass field that will cater for sports such as rugby and soccer. Another track, adjacent to the one currently in progress, is planned and three more multipurpose courts will be built. These courts will cater for sports such as tennis, volleyball, basketball and netball.

“The construction work started on 1 April [this year] and [the stadium] was supposed to be completed by end October, but due to challenges such as rain it could not be completed,” said Ramambila. He added that they had asked the NLC for an extension to complete the first phase. “[It is] sitting at 70% completion,” he said.

The stadium project was previously reported to be the result of a proactive funding initiative by the NLC, meaning that the NLC identified it as an important project, then found a co-ordinator to run it. The co-ordinator in this case was a Gauteng-based non-profit organisation (NPO), Mavu Sport Development, which thus received the R15,9 million NLC grant.

Mavu’s vision is to promote grassroots sport. In an interview last year, Mavu’s spokesperson, former South African Football Association President Mr Kirsten Nematandani, admitted that the projected June completion date for the stadium could not be met. He also said that R15,9 million would not be enough to build the whole facility. For now, only the first phase of the project will likely be completed, Nematandani suggested. A month ago, Nematandani confirmed that an application to the NLC for more funding had been turned down.

Mavu appointed Kone Maweja Project Managers from Polokwane to manage the project. The first priority was the environmental impact assessment. A draft basic assessment and environmental management plan also had to be submitted.

According to the revised budget, an athletics track and soccer field at the stadium will cost just under R11 million to construct. The basketball, netball, tennis and volleyball fields will cost R605 000, while R350 000 has been budgeted for a fence around the facility.

During a site visit three weeks ago, a lot of activity was taking place at Muduluni. Word seemed to have spread that members of the media would be visiting, and everyone from the local traditional leader to the ward councillor was present. It provided a perfect opportunity to gauge the interest and expectations of the local community.

The stadium will change our lives

“This [sport centre] will keep our children busy,” said Jane Gabara, Ward 24’s councillor. She explained that drug and alcohol abuse among young people was rife. “The young children are busy with drugs, because they don’t have sport facilities. It’s a very serious problem,” she said.

Thwalima is also the person who made available the land on which the stadium is being built. “I heard that they wanted to build a stadium this side and I called the traditional council, asking for permission. We gave them this site. When they are finished here, the Makhado Municipality must maintain the site,” he said.

For Ishmael Phuluwa, the chairperson of the project’s steering committee, community involvement is the key to success. He said that eight local people were employed when the first combi-courts were built. When the sub-contractors arrived on the site, more people were employed. “I would say plus or minus 18 people were employed thus far,” he said. He was also confident that, once the complex is finished, some permanent jobs would be created.

However, the vision of an athletics stadium in Muduluni is already several years old. In November 2014, not long after the tragic accident that claimed the life of the sport star, the chairperson of the National Lottery Board, Prof Alfred Nevhutanda, announced that the NLC would finance a sport centre in honour of Mulaudzi. A few months later, in March 2015, the area was visited by former Olympic medallist Hezekiel Sepeng when he launched a programme to identify talent in rural areas. Sepeng mentioned that, before he died, Mulaudzi had had a dream to start a sports academy.

There are many more Mulaudzis

Perhaps the person with the biggest expectations is the legendary athlete’s first coach, Makonde Makhumisane. Makhumisane spotted the young boy, who was more interested in soccer than athletics at that stage. “So, I heard it in my dream, because I am someone with a vision. [I heard] that this was the one who was going to be the world’s number one. I articulated my dream to him and the parents. They agreed. ‘Give me one year six months, and I will make him a champion’ [I said], which I did,” said Makhumisane.

Mulaudzi’s meteoric rise to fame started when he won a gold medal in the African Junior Championships in Tunisia at the age of 19. In 2002, he won a gold medal at the Commonwealth Games in Manchester, England. His biggest achievement was the silver medal in the 800m final at the Summer Olympics in 2004 in Athens. He was narrowly beaten into second place by Yuriy Borzakovskiy of Russia, but he beat the world-renowned Kenyan-born Wilson Kipketer.

Makhumisane believes that many more Mulaudzis are to be found in the Muduluni area. He also believes that, with proper facilities, these athletes can be given a competitive advantage. “Mulaudzi was used to running on gravel. New athletes will have the advantage of being able to train on a proper surface. When they go to competitions, they will no longer be overwhelmed by [unfamiliar]conditions,” he explained.

Makhumisane was confident that no shortage of talent existed among the young athletes he was training. The new sport centre will give him what he needs to nurture them into stardom. “We’re going to hit them big. Watch this space … the best is coming,” he said.

For now, however, the Muduluni community will have to wait patiently and hope that funds do not dry up and that the sports centre will materialize.