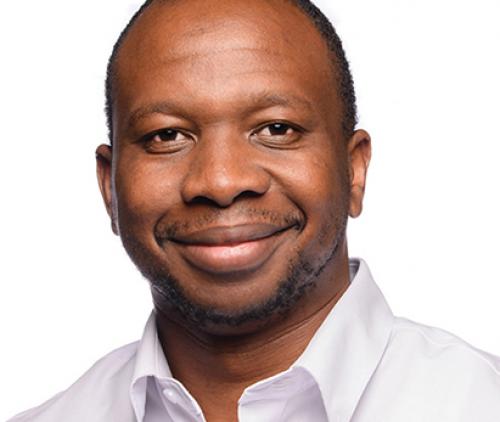 Gene Likhanya’s start in life was not an atypical one; however, his is one that is taking an extraordinary path. Born in Venda in 1984, his world was partly growing up while living with his father in the township of Soweto, and partly with his mother in the family community in Venda. His parents did not have much money, but their emphasis on education saw to it that they sent Gene (and his two siblings) to the very best schools they could possibly afford.

“It is not about black and white for me. It is about what happens between emerging and established farmers and players in the market. Navigating the space of exclusion as a new entrant to farming is difficult. Understandably so, when compared to those in the big leagues, your fledging operation pales. It is also not necessarily about grant money, but more about access, sharing it, in the form of mentorship, so that the fledglings can also grow. Here is the rub, and it is not just a belief, it is something I can prove: an altruistic attitude to business begets growth in your operation, as well as personal success,” shares Likhanya, CEO of Madimbo Mac’s Pty.

Likhanya’s level head, self-sufficiency and healthy attitude to risk saw him join the army when his parents were unable to send him to university. Two years working in a peacekeeping capacity for the UN in Burundi taught him valuable lessons that he embodies in life today and afforded him the opportunity to save enough money to self-fund his Bachelor of Commerce degree, majoring in entrepreneurship at the University of Johannesburg. His money also stretched as far as buying his first 2.5 hectares of land in Tshakhuma, Venda.

“Foremost I learnt about timekeeping. Not just being on time, but for its implications: to show up for life and make the very most of the short time we have. Secondly, I developed a deep capacity for empathy. Envisioning the hardships people in the rest of Africa face buoyed me to make the most of every opportunity that came my way and to practice gratitude every day,” comments Likhanya. Throughout his studies, together with his brother, he planted the 2.5 hectares with macadamia trees. They experimented, they sourced trees from all over, good and bad; they failed before they succeeded and battled to access advice and guidance from the “major leagues”. The woeful gap in availability of and access to resources meant that finding their way took them longer. Just over 10 years later, and having also worked as a business consultant for Old Mutual during this time, he and brother had bought (without any funding or grant money), planted and brought to full production 10 hectares of macadamias in one of South Africa’s most impoverished regions - a region that relies heavily on creation of rural employment.

“I was ready to deliver my crop for processing and scoured the market for this service. The Green Farms Nut Company (GFNC) stood out in their commitment and willingness to engage with me. I am aware of the time and dedication smallholder growers ask from their processing partners; however, it seemed surprisingly short-sighted not to invest into emerging growers of today for the success of the processing business in future. GFNC intrinsically understands the value of this; they have a heart for emerging growers and play a pivotal role in helping emerging farmers participate in the value chain,” continues Likhanya.

“It is not just about ‘upliftment’. Broadening the active agricultural base in South Africa is an imperative - for bottom-line economic output and stability in our country, and frankly, for the future success and growth of our business. It is beyond duty to engage and support farmers like Gene through the supply chain, it is good for business too. Core to GFNC values is investing in infrastructure and growth of the macadamia industry in South Africa. The business has consistently been at the forefront of this for over 30 years. Our mission is to grow the pie, not fight for a slice,” says Allen Duncan, CEO of GFNC.

The big boys think so too, and they are not just about giving money; they want rigour, structure, accountability, and, ultimately, more of the Gene Likhanya-type successes that our country so desperately needs. Likhanya has secured funding from the SAB Foundation, and a 99-year lease has been agreed with the tribal authorities of the Ha-Mahau region in Venda to develop 45 hectares of macadamias (which will be interplanted with cash and cover crops) over the next two years.

Likhanya has also set up his own farmer incubator programme, which has taken on board 12 emerging growers, with five hectares each (60 hectares total) in the surrounds of Ha-Mahau. Together with financial and other support from the SAB Foundation, and Likhanya with his innate understanding of the unique and varied challenges farming in the most rural regions of South Africa, the incubation’s charter is to create sustainable business not only for the farmers, but for support to service-provider businesses in the area for the next 40 years and beyond.

In its entirety, the incubator initiative employs 37 temporary staff, of which 28 are female. This number increases to 50 people when Likhanya’s individual project in the same region is taken into account. He also employs nine permanent staff on his farm in Tshakhuma. A nursery housing 50 000 seedlings is being set up in 2019 and 5000 trees are set to be planted this year, which locals will be benefiting from through skills transfer.

“You care about the rands and cents when you farm in a community, but you don’t let the rands and cents dictate how you do business in communities. Put simply, you don’t step on peoples’ necks. Sometimes we need to believe in people, to give them the gap to innovate. The manager on my farm is a woman who never had a job before. This is meaningful, worthwhile stuff; I want to impact society and change lives for the better. My vision is for this concept to roll out on a bigger scale through the value chain, but still within community farms. My focus is not on private farms or government funding. Bringing people from the fringes of society to inclusive farming is my primary motivation,” Likhanya concludes. (Photos and article supplied by Annelle Whyte, communications manager of GFNC)