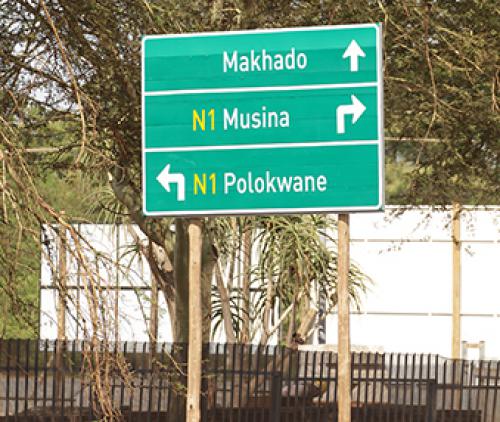 One of the many new sign boards on the R524 from Thohoyandou indicating the name of Louis Trichardt as that of Makhado.

SANRAL will rectify erroneous use of the name Makhado

Numerous Louis Trichardt residents noticed that the name of Louis Trichardt had apparently changed to Makhado again over the past few weeks, especially motorists coming into town on the R524 from Thohoyandou.

For the past couple of months, motorists were left frustrated by the major construction taking place on the R524 between Leeu Street and the N1. The project included the building of a big traffic circle on the corners of Impala and Oranje Street where they meet the R524 as part of the upgrades and expansions of the Makhado Crossing shopping mall. This also led to Leeu and Rooibok Street, which used to connect with the R524, being completely blocked off to the public, basically overnight – also to the great frustration of motorists.

Another part of the upgrade to the road was the erection of new road signage. These new signs, however, all indicate the name of the town as Makhado, all the way into town except at the intersection of the R524 and N1, where the new signs indicate the town’s name as Louis Trichardt.

One of the organisations to oppose the use of the name Makhado instead of Louis Trichardt immediately was the Chairperson’s Association (CA).

The CA has successfully fought the town’s name change to remain that of Louis Trichardt in the past. Most recently, on 9 October 2018, the North Gauteng High Court in Pretoria found in favour of the CA against the Makhado Municipality’s application for a rescission of the 30 October 2014 High Court judgement. According to this judgement, Louis Trichardt was to remain Louis Trichardt after the court set aside the decision of the former Minister of Arts and Culture, Mr Paul Mashatile, to approve the recommendation of the South African Geographical Names Council (SAGNC) to change the name of the town Louis Trichardt to Makhado.

Mr André Naudé of the CA made it clear last week that any person or organisation who refers to Louis Trichardt as Makhado is in contravention of a High Court order and that they would institute legal proceedings against any person or organisation responsible for the approval and erection of the sign boards if the mistake is not rectified immediately.

The South African National Road Agency (SANRAL) was asked whether they were aware of the sign boards erroneously referring to Louis Trichardt as Makhado. The newspaper’s enquiry was then referred to Mr Progress Hlahla (Northern Region Manager).

In his response, Hlahla confirmed that the erection of the signboards was part of the roadworks for the construction of Makhado Crossing. “The design drawings were accepted by SANRAL, which acceptance is administrative in nature,” said Hlahla. He added that he did not know who had manufactured the signboards, in response to a question whether SANRAL had been responsible, with specific reference to the High Court order confirming that the town’s name is Louis Trichardt.

Regarding the above, Hlahla said that they were not aware of the court order. “The name change from Makhado to Louis Trichardt was publicized by the media years ago. SANRAL was not aware of the High Court order. SANRAL looks forward to having a copy of the High Court order provided by the Chairperson’s Association. There accordingly was no intentional wrongdoing,” said Hlahla. He added that the unintentional error was made by the Makhado Crossing project team. “Both Makhado and Louis Trichardt are in common use,” said Hlahla.

Having explained the unintentional, erroneous use of the name Makhado, Hlahla said that SANRAL intended to rectify the mistake. “Instruction will be given to the project team appointed by the developer of Makhado Mall to overlay the wording Makhado with Louis Trichardt,” said Hlahla. He said that this would be done within a reasonable time for a sign company to make the overlays.

At least on the N1 the town’s name is  correctly indicated as Louis Trichardt.