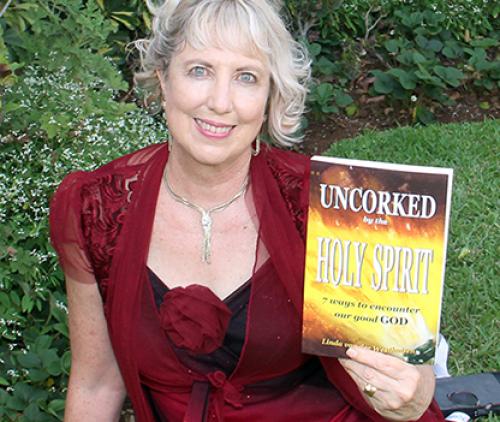 Former journalist of the Zoutpansberger Linda van der Westhuizen with her book, Uncorked by the Holy Spirit: 7 ways to encounter our good God.

Former journalist of the Zoutpansberger Linda van der Westhuizen held the official launch of her first book, Uncorked by the Holy Spirit: 7 ways to encounter our good God, on Sunday, 17 November, at the Agapé Christian Centre in Louis Trichardt.

Pastors Sam and Dalene van Niekerk joined other leaders of Agapé, as well as  pastors from surrounding areas, in the blessing of the book and its author. Pastors Petrus Mamuhohi of Destiny Word Ministries in Mandiwana and Sam van Niekerk of Agapé delivered addresses.

Mamuhohi said he had prescribed the book for his third-year students, while Van Niekerk told attendees the book had been written from the author’s heart.

A time of deep worship followed, led by Bolaji Jegede and Nke Mosoma.
In her address, Linda said to be 'uncorked' meant to be set free from a state of being held in check. She added: “To be uncorked by the Holy Spirit is to have his power unleashed through you.” She emphasized the importance of being anchored in the goodness of God.

A team of nearly 30 people illustrated Chapter 6 of the book, which is entitled 'Move in Risk'. They prayed for the guests and encouraged them. In the process, they were ‘uncorked’ themselves.

“God is amazing. He showed us how much He trusts us as his vessels… it was so humbling,” said team member Nke. Corrie Dercksen said 'fear is a liar' and ministered despite the initial 'stage fright'. Ingrid Pepler from Johannesburg said “this evening was like a heavenly party - from glory to glory!”

“I trust that this book will have a wide reach and uncork more and more people, and that more books will follow,” was the comment of Elize Dercksen.

Linda said she was grateful towards God who put her on this journey and carried her through. She thanked her husband, Rev Jan van der Westhuizen, for his generous support and Agapé Christian Centre and their leaders for their backing. She also thanked Corrie Dercksen, who sponsored the meat, the guests who attended and the whole team for the excellent and joyful way in which they served.

The book is available for purchase at R199 from Linda, who can be contacted at 0845160223 or via the website www.holyspiritauthor.com