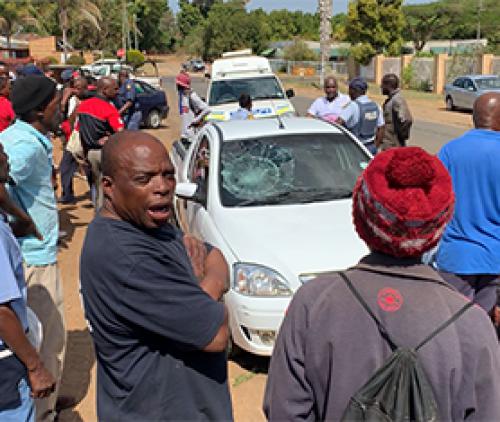 During lunch time today, what looked like an ordinary car accident in Erasmus Street between Grobler and President Street caused a lot of spectator value.

There never seems to be a dull moment on the crime front in Louis Trichardt, but this time one of the alleged criminals did not get away, mainly due to the swift actions of the Makhado SAPS with the support of town watch members and the public.

During lunch time today (Friday), what looked like an ordinary car accident in Erasmus Street between Grobler and President Street caused a lot of spectator value.

It turned out that one of the vehicles involved in the crash, a Corsa bakkie, was apparently stolen in front of Capitec Bank in Krogh Street just moments before. The two alleged perpetrators, however, caught the attention of the police and a wild vehicle chase ensued. Members of the public joined the chase.

With screeching tyres, the thieves tried to outrun the police, driving at high speed down Songozwi Street, according to bystanders. The chase ended almost as soon as it started with the stolen vehicle allegedly hitting another vehicle and coming to a stop. Police were right on the suspects’ tails and managed to arrest one of them at the scene, while a second suspect apparently managed to get away.

The police had yet to confirm the exact details of the incident.