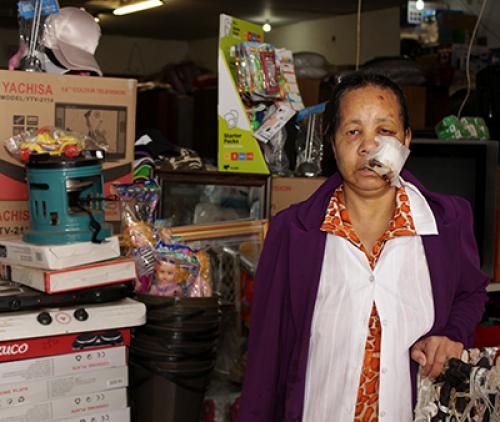 A distraught Mr Miao Mei Yan bearing the scars and wounds she suffered at the hands of a panga-wielding attacker last week. During the same attack, which occurred right here in Louis Trichardt’s CBD, her husband was shot and died in front of her and their son.

"The country is no longer a safe place"

A Chinese family is packing up and leaving South Africa after a brutal armed robbery at their shop in Louis Trichardt left one family member dead and two injured.

“We are leaving the country for China anytime as soon as possible,” said the 32-year-old Mr Jiangui Zhuang when the Zoutpansberger visited them. He was still very much distraught about the death of his 58-year-old father, Mr Xingyu Zhuang, who was shot and killed during the robbery. Apart from his father being shot and dying in front of them, he and his mother, the 54-year-old Ms Miao Mei Yan, were also brutally hacked with pangas.

The vicious attack on the family, who run a shop in Songozwi Street opposite the busy Game centre, occurred just after 06:00 last Thursday, 19 September. They stay in a backroom on the same premises. According to initial police information, three men, one armed with a firearm and two with pangas, forced open the back entrance to the family’s shop.

“We had not yet opened the shop but all of sudden three armed men came from the back of the shop demanding money. All of us were very scared. I tried to hide under some cardboard boxes, but one of them came after me hitting me over the head with a panga,” said Jiangui. His father was shot and died at the scene after he decided to try and fight off their attackers. In the end, the three attackers fled the scene without taking anything.

The Zhuang-family have been running their shop selling different items ranging from cutlery to bicycles and clothes since 2006. “This is the first time we’ve encountered such brutality. We can no longer stay in South Africa. The country is no longer a safe place to live,” said Jiangui. His sentiment was shared by an adjacent shop owner. His neighbour stated that since 2008, crime has continuously escalated and it seems as nothing is really being done about it. “We are losing business to crime. I remember when I started running this business I used to open at 07:30 and close at 05:30, but now I can no longer do that. I open at 08:30 and close at 04:30,” the neighbouring businesswoman said. She preferred to remain anonymous. She added that they have no other choice but to come to work because they have families to look after and other responsibilities. “Safety in this country is no longer guaranteed,” she said.

Mr Israr Maqbool, who is running a nearby furniture shop, said it was the first time that he experienced such a violent incident. He has been running his shop in Louis Trichardt for the past six months. Previously he was trading in Polokwane, but decided to relocate to Louis Trichardt.

“We are in the process of trying to sell the business,” said Jiangui. A week later, the physical scars left by their attacker’s pangas were still clearly visible, so to their emotional scars.

The brutal attack on the Zhuang-family comes amidst a spate of violent attacks on foreigners in other parts of South Africa. The most violent of these attacks occurred in Gauteng. It is not sure whether this was the reason why the local and provincial police were not very forthcoming with information about the attack. By Wednesday morning this week, the newspaper was still trying to confirm the details of the attack and murder of Mr Zhuang. Local police did, however, eventually confirm that nothing was taken during the attack and that no arrests have been made by the time of going to press.