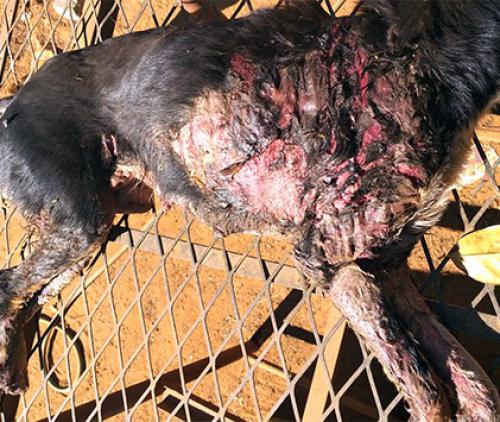 The severely injured little dog that only succumbed to its injuries a week after boiling water and oil was poured over him. Photo supplied.

A resident of Tshikota who poured boiling water and oil over a dog as punishment for stealing some meat, pleaded guilty to a charge of animal cruelty on Wednesday morning.

The woman’s actions were described as totally barbaric by fellow-residents.

The 36-year-old Martha Sethokga was summonsed to court on 12 July on a charge of contravening the Animal Protection Act, Act 71 of 1962. The case against her relates to an incident on 24 June.

The story behind this gruesome act was that the dog, acting purely on instinct, entered Sethokga’s yard and stole some meat she left outside in an open pot. She then tracked down the owner of the dog and told him that he must pay for the meat. Two days later, when the owner of the dog could not pay, Sethokga set a snare at her house, caught the dog and poured boiling water and oil over him. Sethokga left the severely burnt dog in the snare to suffer. It was only another two days later that a passer-by took the time to at least cut the dog from the snare.

Finally, on 1 July, the Louis Trichardt SPCA were called to come and assist the dog. Senior inspector Lawrence Khodobo was quick to respond. Sadly, the dog succumbed to its severe injuries on the way to the veterinarian.

The incident caused a huge public outcry. It also motivated the local SPCA to lay charges against Sethokga.

On Wednesday, Sethokga appeared in front of magistrate Marcel Pieterse where she pleaded guilty to the charge against her. In response, Pieters ordered Sethokga to pay a R3 000 fine or spend the next six months in jail. Not having the money available, Sethokga was immediately placed in custody and locked up until such time that she can pay the full amount in a single payment. She was not given the option to pay the fine in instalments.

Sethokga’s conviction is another pat on the back for SPCA inspector Khodobo who meticulously compiled the docket for court. It is his second conviction on a charge of animal cruelty this year. “This must again serve as a warning to all that all animals have rights and are protected by law. People should treat them with respect. We will not tolerate any form of animal abuse,” said Khodobo shortly after securing the conviction. He added that people must remember that they will be stuck with a criminal conviction for the rest of their lives if convicted in terms of the Animal Protection Act. “It is just not worth it,” said Khodobo.

Khodobo again appealed to members of the public to report all forms of animal abuse and cruelty. He also urged them to come forward as witnesses in cases of animal abuse. “In this case, we were lucky that an eyewitness was willing to testify,” said Khodobo. To report animal abuse or cruelty, phone Khodobo at Tel 082 965 5151.