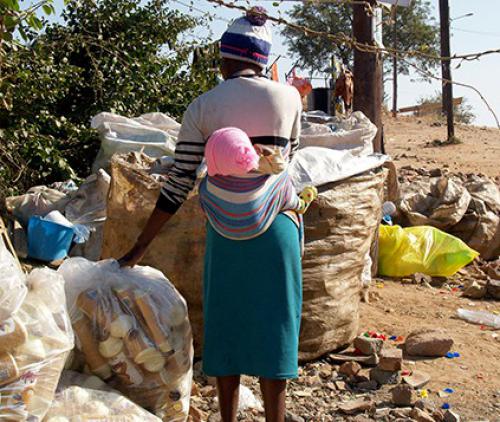 No sheltered life at these Musina shelters

We encounter them in our communities every day – the people scouring for trash, pushing trolleys filled with boxes or glass bottles. Some have other means of securing a meagre income, such as performing duties as car guards, while others stand around waiting on street corners hoping to get a “piece job”.

Most of them are from our neighbouring country, Zimbabwe, but some come from countries further north, and many are undocumented citizens constantly on the lookout for police who may deport them. Some have “aslam” papers (asylum seekers), which they hope will give them a bit of an advantage in trying to secure a solid job.

Freelance journalist Bernard Chiguvare spent a few days in Musina, tracking down these “foreigners” and trying to establish why they are here and what type of life they lead.

The story of a Zimbabwean refugee

The protracted problems with the Zimbabwean economy have brought misery to most of its citizens. In November 2017, the 37-year-long iron-fist rule of Robert Mugabe ended, and many believed that the dawn of a new Zimbabwe had arrived. For most citizens, unfortunately, the situation remained dire and many of them looked to South Africa as a way of escaping from poverty.

Vimbisai* and her husband are two of the undocumented Zimbabwean citizens who made their way across the border in December last year. They are from Mhondoro, a rural area roughly 200 km southwest of Harare. After carefully considering all the options, they decided to leave their three children with relatives and head south to try and find employment in South Africa.

Back home life was tough for the family. At times they had to go for days without a proper meal. The children had dropped out of school as they could not afford to buy school uniforms or pay the school fees. “We could not sustain life back home. My husband and I decided to come to look for work, so that we could feed and educate our children,” explained Vimbisai.

When arriving in Musina, the northern-most border town, they realised that opportunities were few and conditions were far from ideal. South African employers give preference to people with working permits, something that Vimbisai and her husband did not have.

The family members were quickly split up as no shelters can be found that can accommodate men and women together. Vimbisai was accommodated in a women’s shelter run by the local Catholic Church, while her husband had to find refuge at the men’s shelter, run by the Musina Ministry of Compassion church.

“We cannot rent a room and stay as a family, so we decided to seek accommodation at these refugee shelters. My husband stays at a men’s shelter a few kilometres away. He is not working. Even though he regularly comes to visit, we do not have enough family time,” said Vimbisai.

On the day Zoutpansberger visited the women’s shelter, most of the refugees stayed indoors because they were afraid that the police might pay them a visit. Here we found Vimbisai with her toddler wrapped in a blanket on her back. When they left Zimbabwe, her baby was less than a year old.

Vimbisai wakes up early every morning to go and search for recyclable material in the streets of Musina. On the day of our visit, she had just returned from a nearby shebeen where empty 750ml beer bottles are discarded. Her excursion was cut short by the presence of a police van. She only managed to pick up one empty bottle.

“I cannot move freely around Musina to collect the recyclable material, because I can be arrested and deported anytime,” said Vimbisai. She complained that she did this every day, but the income derived in this manner was meagre and did not sustain the family.

When Zoutpansberger visited the men’s shelter at the Musina Ministry of Compassion church in Matswale, Vimbisai’s husband had already gone out looking for recyclable material in town.

Fleeing from the DRC

Back at the women’s shelter, we were introduced to Georgette Witangila and Happy Kinanga from the South Kivu province of the Democratic Republic of Congo (DRC). Both fled from the war that has displaced and killed thousands of people in that country.

The two women claim that they are victims of rape by the rebels fighting the DRC government. Witangila (24) arrived in the country in April with her seven-month-old baby, while Kinanga (23) arrived in June, with her baby of six months.

Conditions at the shelter are far from ideal. The room they share with the other women has 18 beds, but unfortunately the two could not get beds. They sleep on the floor between some beds, covering themselves with thin blankets.

According to Kinanga, the shelter offers porridge for breakfast only for the children. The rest get a meal at lunchtime, but no supper is supplied.

By fleeing to South Africa, they hoped to make a living through engaging in odd jobs, but they are not free to move around seeking for employment, because they are still waiting for temporary asylum papers.

“We can only walk out of this shelter on Mondays or Tuesday when we go out to the offices of Home Affairs for asylum papers,” said Witangila while breastfeeding her baby. She complained that they had been visiting the Musina Home Affairs office several times, only to be told to come back the following week.

Witangila told us that she was an orphan. Her parents were killed during the war in early 2007. Before she fled the country, some distant family members took care of her.

Kinanga explained that they had had no choice but to flee the war-torn DRC. “I was subject to abuse, which included rape. I did not want to have another baby, so I sought help from long-distance haulage truck drivers travelling from the DRC to South Africa. The driver bought me food. For the whole week while we travelled from DRC to South Africa, I breastfed my child,” she said.

No shelter for a shelter

At the men’s shelter, we found Bishop Simon Sithole, the founder of the Musina Ministry of Compassion church. The conditions at this shelter were clearly far worse than at the women’s shelter.

Sithole showed us an unpaid water and electricity bill of R178 122,67. “This water bill is outstanding since 2008. I pleaded with the Musina Municipality not to cut off the water, since this was key to the lives of the refugees. Instead, the municipality opted to cut off the electricity. The refugees now have to prepare food using wood,” said Sithole.

Sithole has been running the shelter since 2005. The number of refugees increased between 2008 and 2009, because most Zimbabweans flocked to the country after the collapse of the economy. During that period, the water bill increased dramatically.

Sithole tried to negotiate with the municipality, but not many options existed. They suggested that he should pay off part of the debt in a lump sum and the rest in monthly instalments.

“I am unemployed, and I cannot afford it, so I turned to the United Nations High Commissioner for Refugees (UNHCR) for help,” Sithole said. He did not find any assistance and now accuses the UNHCR of taking a back seat. “This surprised me, because this office is the one dealing with refugees,” said Sithole.

According to Isabel Raisedza, who runs the shelter, they house up to 800 refugees at times. During a visit to the shelter last month, about 200 people were in the shelter, in four tents. A few were sharing mattresses, but most slept on the floor. The church can only offer them accommodation and a place to bath. Refugees have to find food for themselves.

They cook food outside the tents. When it rains and they cannot light fires, they buy or beg for cooked food. Three toilets and three bathrooms are on the premises, which they keep clean themselves.

Raisedza said that the numbers of refugees had dropped since the Zimbabwean Special Permit system was introduced. “My wish is to feed them, but I have no resources,” she said.

*Vimbisai is not her real name.

Bishop Simon Sithole (centre with grey), founder of the Musina men's shelter, surrounded by some of the refugees.