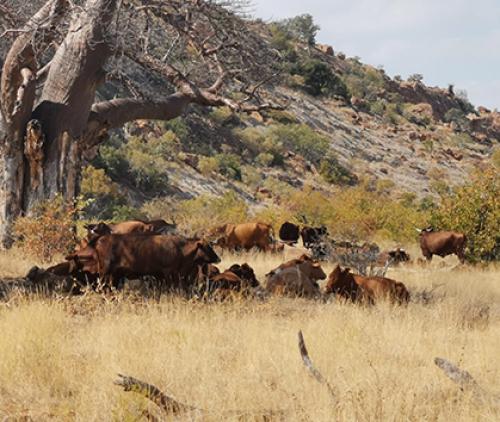 Visitors to the Mapungubwe National Park must accept the fact that large herds of cattle in the park form part of the park’s cultural landscape. This is according to Mr Sipho Mkhwanazi, SANParks' regional communication manager. Photo supplied.

Visitors to the Mapungubwe National Park and World Heritage Site will have to accept the fact that communal cattle in the park are part of the park’s cultural landscape.

This is according to Mr Sipho Mkhwanazi, SANParks’ regional communication manager. He was responding to a media enquiry after the Zoutpansberger received a complaint about the presence of communal cattle in the park. An overseas family who recently visited the park stated that they were looking forward to enjoying a truly African wildlife experience but were left disappointed when they found a large herd of cattle roaming the park.

Mkhwanazi said that they were aware of the problem of cattle entering the park from Zimbabwe, but explained that the park had been declared as a cultural landscape and therefore had evolved and developed over many years, with cattle as integral part of the landscape, securing the livelihoods of people living in harmony with nature. “National parks are declared for various reasons and therefore it is not a given that every park will only feature wild animals,” said Mkwanazi. As an example, he mentioned the Richtersveld National Park where communities make use of the landscape and goats grazing in co-existence with natural wildlife to protect the overall integrity of the park. “The Greater Mapungubwe Transfrontier Conservation Area (Botswana, South Africa, Zimbabwe), which forms part of the Mapungubwe Cultural Landscape, therefore represents the culture and values of people who lived in and with their surroundings. These cultures have therefore never been confined to colonial boundaries, stating the case for a cultural landscape stretching over International Boundaries. Cattle are therefore not an abnormal occurrence within this cultural landscape, as they did form part of a civilisation that once roamed the Mapungubwe Valley,” said Mkhwanazi.

Mkhwanazi did add, however, that they monitored the numbers and movement of the cattle. “The cattle did enter from Zimbabwe, but should not be described as a problem … It is rather management intervention that is necessary to ensure numbers are kept to an acceptable norm without impacting on the ecological values of the park. The cultural value, as well as ecological integrity, needs to be balanced to ensure the objectives of the cultural landscape are achieved. SANParks have rangers in place patrolling the 12km river boundary on a daily basis,” said Mkhwanazi.

Disease control is another aspect that comes to the fore, especially with the recent foot-and-mouth (FMD) disease outbreak in Vhembe still fresh in people’s memory. “Animals are monitored for any signs of FMD on a regular basis during daily patrols and any abnormalities will immediately be reported to the relevant authorities. The outbreak earlier this year was at a considerable distance from the park in an area known for such occurrences. SANParks will continue monitoring for such and gather information of cross-border outbreaks that might influence the area,” said Mkhwanazi.

Mkhwanazi also responded to concerns over visitors’ safety to the park. Readers might remember the recent collapse of a wooden deck at the Mopanie Rest Camp in the Kruger National Park in May, which saw seven people ending up in hospital. The same family who complained about the cattle in the park also had concerns about the popular “treetop” walkway at Mapungubwe. The protective safety wires on one side of the walkway underneath the handrailing were completely gone and the family had to battle to keep their young children safe while walking across the walkway.

Mkhwanazi explained that the wires had been removed because of damage caused by a falling tree. “We have addressed the relevant staff that danger tape should have been placed whilst they were waiting for materials to fix the damage…” said Mkhwanazi. He added that the problem had since been fixed. “As an organisation we will always put the safety of our visitors first by doing everything within our powers to prevent any mishaps from happening. Managing National Parks stretched over huge distances where wild and dangerous animals roam, [and] we would also like to urge our visitors to stick to the rules within our parks, as they are there to keep them safe and not to regulate their freedom of movement. SANParks is committed to addressing safety regulations and ensuring our guests can enjoy the sheer beauty and differences of all our national parks,” said Mkhwanazi.

The “treetop” walkway at the park. On the right one can see that wires are in place below the handrailing as a safety precaution. On the left, almost all these wires are gone. SANParks has stated that the problem has since been fixed and that visitors' safety remains a priority for them. Photo supplied.