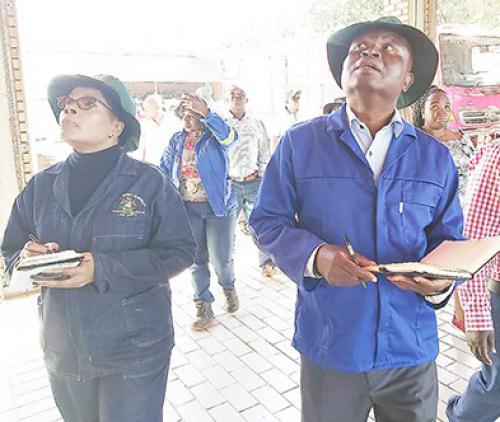 Cllr Nenguda, accompanied by Sylvia Ndou (left), is making notes about the sad situation at the Obed Mashaba Fire Station. On the right is Mr Nditsheni Mathule.

The Obed Mashaba Fire Station in Musina is close to being dysfunctional. This came to light during a recent visit of the Vhembe executive mayor, Cllr Dowelani Nenguda, to the facility.

Nenguda visited the station on a fact-finding mission. After the visit, he expressed his concern about the dilapidated condition of the fire station.

The general manager of community services in Vhembe, Mr Nditsheni Mathule, and the facility’s divisional officer, Mr Carel van der Walt, took Nenguda on a tour of the station.

Nenguda was informed that the fire station relied on only one truck and one bakkie as the other five cars were too old to fix. Van der Walt said that a lack of security at the station caused the lives of firefighters and other workers to be at risk, especially during the night. Showers and toilets are also not working.

“Our other concern is that there are no cleaners around the yard as the two who are there only clean inside the offices. Another problem is that some of the ambulances belonging to the Department of Health park here. These vehicles obstruct our emergency cars as they are supposed to have free movement when they respond to emergency calls,” said Van der Walt.

He added that the building was not in good condition, with broken windows and a falling ceiling.  According to him, the facility is understaffed, as those who retire or pass away are not replaced.

Firefighters are also forced to double as receptionists, because no one works in that office. “This has been going on since last year, following the death of the employee who was working as receptionist.” He added that no lights were working in the station.

From the fire station, Nenguda, who was accompanied by the acting municipal manager, Ms Sylvia Ndou, members of his executive committee and councillors from Musina and officials from both the district and Musina, went to a local sewerage plant. There he discovered that workers were being harassed by elephants from a neighbouring farm. Cable theft and assault and robbery of employees are also a problem at the plant.

Nenguda expressed his concern about the challenges facing the two facilities.

He promised Van der Walt that he would engage with the relevant offices, together with Mathule, and make sure that a solution to the problems would be found.

Some of the ambulances that were 'illegally' parked at the station.

Some of the five vehicles at the fire station are not roadworthy.