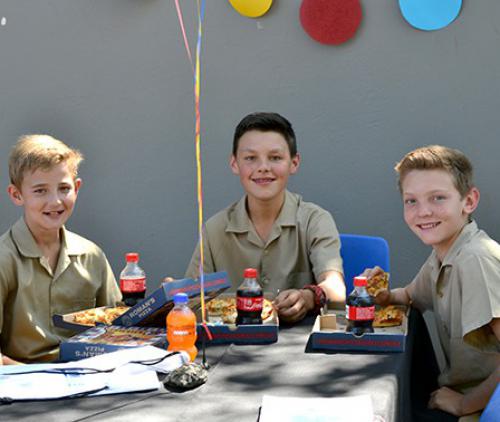 Grade 7 pupils from different schools gathered at Louis Trichardt High School last Thursday to get a glimpse of what awaits them when they walk through the gates of their new school next year.

During Louis Trichardt High’s open day, the excitement and curiosity of the future “Triegies” were clearly visible. “I think high school is going to be a big adventure. I am looking forward to making new friends,” said Khonani Munzhelele. Khonani formed part of the Grade 7 delegation from Louis Trichardt Primary School.

“I think high school is going to be an awesome experience, and it’s going to be great fun with me and my best friend,” said fellow young Triegie Naledi Mokoena. Lutendo Mudau agreed but said that she looked forward to making new friends from other schools. “New friends! New teachers!” she said.

The more audacious of the young visitors asked about the academic programme and what subjects they can choose in the following years. They wanted to know about study fields such as tourism and engineering design. Some others were more interested in the location of the “vryboom” (the tree where the young lovers secretly get together), but at the end of the day, most of the fears and uncertainties were addressed.

Erica “Jeff” Muneri, a pupil from Soutpansberg Primary, was not totally sure whether she would become a learner at Louis Trichardt High School, but she enjoyed the session. “I am very curious to know what such a sublime and well-known school has in store for us,” she said.

A lot of excitement was in the air during Louis Trichardt High School’s open day last Thursday. Some of the matriculants were inundated with questions and had to divide their attention to deal with all the “new Triegies”. Here, Ditau Mandobe, deputy headboy of the school, is flanked by Grade 7s from Louis Trichardt Primary. In the front is Monalisa Dladlama. Left is Mulweli Muthala and on the right are Lutendo Mudau (back) and Naledi Mokoena. At the back, with her arm around Ditau, is Khonani Munzhelele.