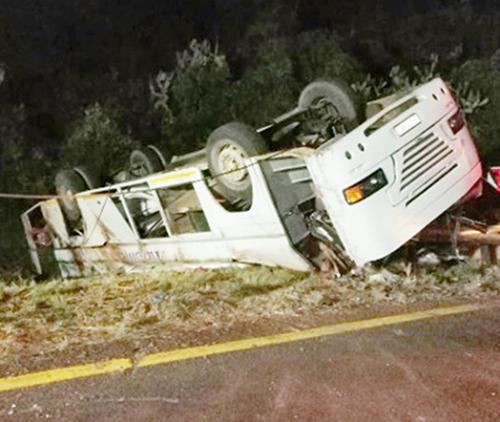 The wreckage of the bus. Photo supplied.

Fourteen people were killed and many injured in a bus accident on the N1 in the Soutpansberg on Monday night. The bus, ferrying Zimbabweans from Pretoria back home, overturned near the Ingwe Hotel in the umpteenth accident on this road.

Several passengers died instantly. The injured passengers were taken to Elim, Siloam and Louis Trichardt Memorial hospital, while those who were critically injured were transferred to the provincial hospital in Polokwane.

According to an eyewitness, “the broken bodies were scattered all over the road. Scores of bewildered community members looked on in disbelief as the badly mutilated bodies were loaded into the hearses”.

A survivor of the crash, Ms Juliet Mpandawana, said the accident could possibly have been the result of driver’s fatigue. “We were supposed to leave Pretoria on Sunday for Zimbabwe, but that was not the case. We had to spend the whole night waiting for the bus till Monday morning. The bus arrived around 05:00 on Monday. The drivers did not rest. We loaded our goods and off we left for Zimbabwe. As we were not happy going back with the same drivers, we insisted on being refunded, but that fell on death ears,” said Mpandawana.

She blames the driver for speeding, the overloading of goods and driver fatigue.

The mayor of the Makhado Local Municipality, Cllr Samuel Munyai, was shocked to hear about the accident. He sent his condolences to the families, friends and co-workers of the deceased.

The MEC for Transport and Community Safety, Makoma Makhurupetje, also expressed shock over the accident. “Our thoughts and prayers are with the families of the deceased during this time of grief, and we wish a speedy recovery to the injured ones. The department shares the heartache and is saddened that so many lives continue to be lost on South African roads, which not only impacts negatively on their families but on the province and the country in general,’’ said Makhurupetje.

Makhurupetje called on bus drivers to take a rest and check on the roadworthiness of long-distance buses to avoid the loss of lives. “We are deeply concerned about accidents involving buses as they lead to more loss of lives, compared to ordinary motor vehicles. The drivers and vehicle fitness of long-distance cross-border buses is also a matter of deep concern to us.”

He added that the time had come for law-enforcement officers to step up their routine checks on these buses to prevent this kind of accident from happening. “I also call upon drivers of buses and other public transport to take rest in between trips as the lives of passengers remain in their hands,” said the MEC.

The police confirmed that they had opened a culpable homicide docket and at the time of our going to press they were still waiting for families to come and identify the bodies.

One of the accident survivors, Ms Juliet Mpandawana.

A survivor of the accident with some of the children, photographed at the hospital.