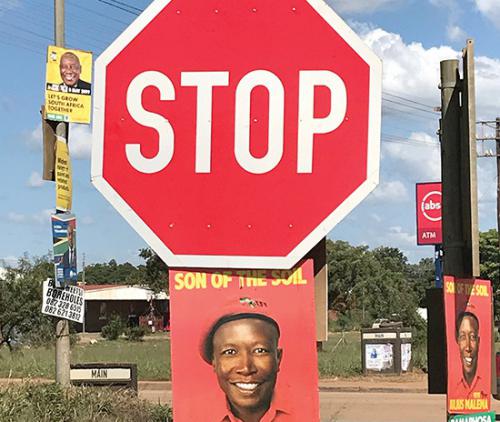 Election posters on almost every single road traffic sign at the busy Rissik Street intersection with the N1. This, according to the National Road Act, Act 7 of 1998, is an illegal practice. By Tuesday thsi week, these posters were removed.

While almost all political parties promise an end to corruption and a return to the rule of law, many of them seem to be off to a bad start regarding where they “illegally” put their campaign posters.

Residents of Louis Trichardt and surrounds are overwhelmed by the current information overload caused by political parties’ putting up their posters on just about anything that stands long enough. But, and there is always a but, several restriction apply as to where you can and cannot put up your election posters.

Nowhere is the problem more obvious than at the three N1 intersections through town. The Zoutpansberger asked SANRAL, the responsible authority for the N1, if the situation was acceptable?

In response, national SANRAL spokesperson Mr Vusi Mona said that they indeed faced a challenge regarding the erection of posters at several intersections along the national roads. “However, there are regulations to be observed,” said Mona.

Mona explained that political parties have to apply at the local municipality to display posters and the municipalities have to provide conditions of approval. “The display of political posters has to comply with the regulations on advertising on or visible from national roads and should have municipal approval to be displayed in any position,” said Mona. He added that SALGA (South African Local Government Association) would liaise with local authorities and, if required, with SANRAL, if any relaxation of the municipal by-laws was required near the election date. “SANRAL has up to date not received any conditions from SALGA in this regard,” said Mona. He added, however, that SANRAL was empowered by the South African National Road Agency Limited and National Roads Act, Act 7 of 1998, and its regulations, which could only be relaxed by the Minister of Transport. “If the Minister relaxes the conditions, we will be informed accordingly,” said Mona.

A “poster” is, among others, defined as any placard announcing the candidature of any person nominated for election to parliament, local government or any similar body. Regarding this, Regulation 24 on outdoor advertising, relating to sidewalk poster and notices, states that such a poster may be displayed only in an urban area of partial or minimum control. No person may erect a sidewalk poster or notice without first obtaining the written approval of the relevant municipality. Most importantly, the regulation states, these posters can only be displayed on an electric light standard or other structure that is provided for the express purpose of pasting or affixing the poster or notice, and may not be attached or affixed to a road traffic sign or a signal, wall, column or post of a veranda or balcony, electric box, tree or bridge. Interestingly enough, the regulation also states that, in the case of election or referendum campaigns, no more than three posters per post or standard shall be allowed. These election posters may also not be put up before the date of the election has been gazetted and must be removed no later than 14 days after the election. Posters may also not be displayed on the road reserve boundaries or freeways.

Apart from the above, Regulation 13 of the Act states that an advertisement shall not, except where specifically authorised by these regulations, cause any obstruction to a motorist’s view of the roadway or its approaches, regardless of the direction the motorist is travelling; be positioned on a road island or median (could be allowed by the municipality bylaws); be suspended across a national road; be erected within or suspended above a visual zone (visual zone is 250m); or be permitted at urban street corners (could be allowed by the municipality bylaws).

Makhado Municipal spokesperson Mr Louis Bobodi this week responded by confirming that they only gave permission for political parties to put up their posters on lamp posts as per the IEC's request.