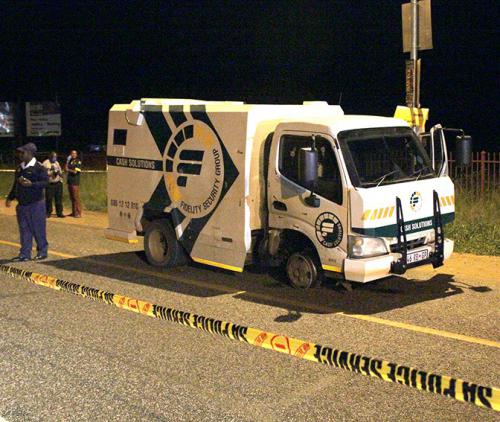 The badly damaged Fidelity cash-in-transit vehicle where it came to a halt on the N1 just outside Louis Trichardt. The vehicle was sprayed with bullets, injuring the driver. He, however, managed to maintain control of the vehicle despite the front right tyre being damaged. In the end, the gang of robbers fled empty handed.

Gunmen flee with nothing after massive firefight

A ruthless exchange of fire between a large group of cash-and-transit (CIT) robbers and the crew of a Fidelity CIT vehicle broke out on the R578 road between Elim and Louis Trichardt on Tuesday evening.

The chaos ensued shortly after the Fidelity crew picked up a cash deposit in Elim and started travelling back to Louis Trichardt at around 18:50.

According to the police’s provincial communications office, armed attackers travelling in four Toyota Hilux bakkies (three white and one silver in colour) intercepted the security vehicle and wildly opened fire on the Fidelity crew in an attempt to force them off the road.

What happened next is nothing short of a miracle and a heroic attempt by the driver of the security vehicle to not only save himself and the crew, but also their precious cargo.

Most of the robbers’ fire was concentrated on the driver side of the armoured CIT truck. In the process, the attackers took out the driver side front tyre of the truck, but the driver managed to maintain control of the vehicle by driving on the rim for kilometres on end.

The badly damaged truck’s engine finally seized a few hundred metres past the Elim/N1 traffic circle just outside Louis Trichardt. Luckily the group of attackers also gave up the hunt after one of the Fidelity guards apparently managed to fire off a few shots in return.

The police on Wednesday confirmed that the driver of the truck was wounded during the attack, but could not confirm where he was hit or how serious his injuries were. According to bystanders, he was apparently struck in the arm.

That the attackers were out to kill is sure. The newspaper counted about twenty bullet holes to the body of the CIT vehicle, mostly concentrated on the driver side.

The police stated that the robbers fled without getting their hands on the money. At the time of going to press, they said, no arrests have been made. They could also not confirm what weapons were used in the failed cash-in-transit heist, saying only that rifle cartridges were recovered from the scene.