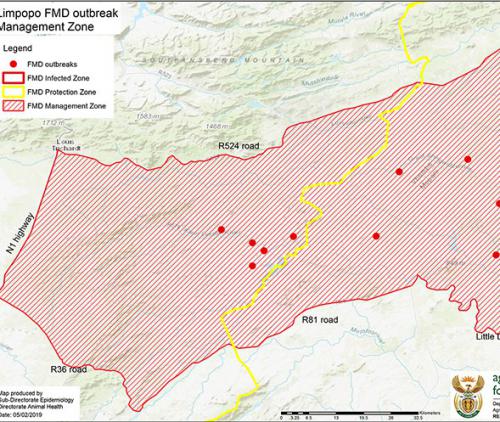 The Limpopo foot-and-mouth outbreak management zone. Map supplied by the Department of Agriculture, Forestry and Fisheries.

As on Wednesday, 17 April, 14 weeks had gone by since the first case of the foot-and-mouth disease (FMD) outbreak in the high-surveillance area of South Africa’s FMD-free zone in the Vhembe District was detected. As a result, South Africa lost its World Organization for Animal Health (OIE) FMD-free zone status.

“There have been no new cases of FMD detected in the disease management area declared in Limpopo in the last ten weeks and thus, three incubation periods have lapsed. Intensive surveillance demonstrated that the virus did not spread and that the outbreak has been contained,” said the Department of Agriculture, Forestry and Fisheries in a joint statement issued with the livestock industry last week.

However, said the department, strict movement controls remain in place in the disease-management area and everyone is encouraged to adhere to these regulations, even though roadblocks will most likely be discontinued by the end of April 2019. “No animals may move into, out of, through or inside the disease management area without state veterinary approval. No unprocessed animal products of cloven-hooved animals are allowed out of the disease-management area without the necessary state veterinary permits. These movement controls will remain in place for the next few months, until the outbreak can be fully resolved,” said the department.

A full animal identification and traceability system is also being put in place for all vaccinated animals in the previous free zone part of the disease management area. “The submission to the OIE Technical Committee for a containment zone is being prepared, though there are challenges beyond our control; we plan to still submit, albeit later than anticipated,” said the department.

In the meantime, trade has resumed for commodities considered safe by the OIE after the department successfully negotiated the revision of veterinary health certificates for beef to Bahrain, Lesotho, Mozambique, Egypt, Qatar, Jordan, Swaziland, Seychelles, Kuwait and the United Arab Emirates; and for game (venison produced before 5 December 2019) to Namibia. “Trade in pork from foot-and-mouth-disease-free pig compartments has been re-opened to Lesotho, Seychelles, Mozambique, Swaziland and Namibia (partially),” said the department.

In their press release, the department said that the markets for dairy products had largely been restored, while the market for the export of wool to Egypt had been opened. “The trade task team is working hard to open trade channels for these commodities that are still not trading freely, which mainly include wool, mohair and hides (for leather production) …  Negotiations still underway include Namibia (for beef), Botswana (for pork), Egypt (for hides, skin) and Malaysia (for hides, skin and wool),” said the department.

The department thanked all farmers, industries, other government institutions and colleagues who are working with Veterinary Services to resolve the current situation. “More funding is still required to finally resolve the situation, and for implementation of a more sustainable FMD-Control Strategy,” said the department.