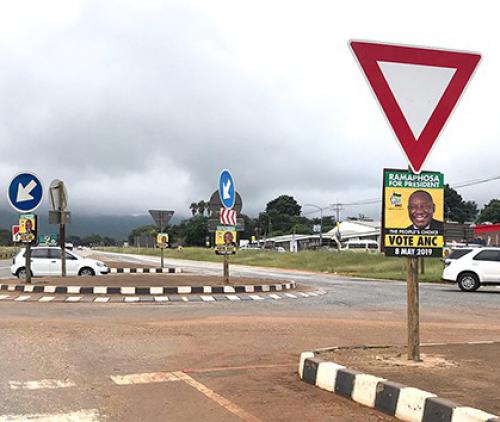 Political posters on each and every traffic sign at the Stubbs Street /N1 traffic circle. The poster were promptly removed.

With the general elections around the corner on 8 May this year, a full-out poster war has erupted between political parties.

Everywhere you look, lamp posts, traffic signs and even trees have become littered with political posters. But are political parties allowed to put up their posters wherever they want to?

Ms Nkaro Mateta, Limpopo’s provincial electoral officer, said that politicians were indeed not allowed to hang up their posters on traffic signs. “We did a workshop with political organisations in which we informed them about the Electoral Code of Conduct. They know that it is not allowed, but they are doing it deliberately,” she said. In Musina, political parties have hammered their election posters onto baobab trees. This despite the fact that baobabs are a protected species, which makes it illegal to harm them without a permit.

According to Mateta, the poster wars usually spiral out of control over election time, despite politicians’ being warned of the consequences. The question remains: Are political parties acting out of ignorance or arrogance? Many say it is a question of both.

So, what exactly are the consequences of putting up a political poster where it does not belong?

Political parties that breach the Code of Conduct can be fined up to R200 000, have to give up the party’s election deposit, be stopped from working in an area, have their votes in an area cancelled and, in a worst-case scenario, have their party registration cancelled.

What can the man in the street do to curb the problem? “Members of the public can report these politicians to their nearest IEC offices,” said Mateta. If the electoral code of conduct is breached, the matter can be referred to the electoral court.

What is important to note at this stage is that the Electoral Code of Conduct does not specify where politicians are allowed or not allowed to hang up their posters. According to the Code, as contained in the Electoral Act 73 of 1998, parties and candidates are only prohibited from using language that provokes violence, intimidates candidates or voters, publishes false information about other candidates or parties and destroy, remove or deface posters of other parties. Any party or candidate found guilty of breaching the code is guilty of a criminal offence and can be fined or sent to prison for up to 10 years.

As to where posters may not be put up, this issue is regulated by other legislation, including each town’s municipal by-laws. This means that what is allowed in one town may not be allowed in another. Municipal spokesperson Mr Louis Bobodi was asked to give clarity on Makhado’s municipal by-law in this regard, but at the time of our going to press had yet to respond.

Political posters on traffic signs at the N1/Main Street entrance to Eltivillas in Louis Trichardt.