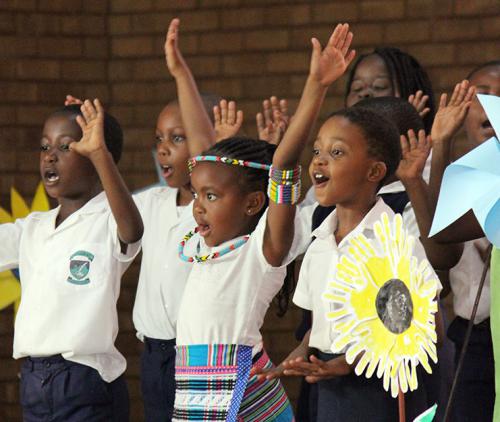 The event went off smoothly, starting with a moving rendition of We are the World and ending with a symbolic display of bubbles.

This year, Ridgeway Independent School joined Rise for Climate Change, which saw events taking place all over the globe to support it.

Executive headmaster Bruce Wells opened the event on 7 September with a warm welcome for guests, including representatives from Rise for Climate Change and the local business community. Wells said that it was a huge privilege for Ridgeway schools and the Louis Trichardt community to come together with the rest of the world to try and achieve the same objective for change. He explained that a green economy, as described by the United Nations Environmental Programme, “can be defined as one that results in improved human well-being and social equity, while significantly reducing environmental risks and ecological scarcities”.

In her welcoming address, Astrid Fourie, the organiser of the event and representing the Eco Gecko Club, said that things such as the burning of fossil fuels, coal for energy, and toxic waste dumps were all releasing large amounts of greenhouse gases into the atmosphere and making the earth hotter and hotter. “Right now, our planet is in crisis,” she said. “Our world is actually sick and running a very high fever. It is estimated that by the end of this century, we will be two degrees warmer.” Astrid finished by saying that “…it is time to say stop. It is time to take action. Today we rise in solidarity with millions of people around the world and make our voices heard.”

The children opened the show with a beautiful rendition of We are the World, followed by a play showing how cutting back on fossil-fuel-generated electricity can help the planet, and a final display of traditional dancing that received wild approval from the audience. The event closed with closing remarks from deputy head Mollie Madziva, who said in her invitation to the community to join that “Today’s young people face the greatest burden from climate change yet had no hand in creating it. Leadership of youth against crisis is critical, to hold adults and elected officials accountable, to take meaningful action against climate change.”

Ridgeway Independent School and Ridgeway College were part of the Global Action Summit held in San Francisco, where a delegation of African leaders from three countries represented the continent. Video footage from the event held at Ridgeway will join the videos and photos of those around the world who took part in Rise for Climate Change 2018.

On 14 September 2018, the petitions signed and collected by Ridgeway and all the other schools, municipalities, businesses, and civil societies around the world will be presented at the Global Climate Action Summit. Astrid encourages members of the community to follow the Rise for Climate Change movement online and support both Ridgeway and their cause. “Next year, petitions will be localised,” she said. “The school will be approaching actual companies that pollute to encourage them to find cleaner ways to protect our children’s future.”

Jo joined the Zoutpansberger and Limpopo Mirror in 2018 pursuing a career in journalism after many years of writing fiction and non-fiction for other sectors.

Ridgeway pupils put on a show of traditional dancing with a modern twist. Recorded on the day, these videos will join others from around the world as part of the school's protest against fossil fuels.

Deputy head Molly Madziva said that Ridgeway was a part of the worldwide day of action to demand that local leaders commit to building a fossil-fuel-free world that works for all.

Executive headmaster Bruce Wells said that it was a huge privilege for the Ridgeway schools and the Louis Trichardt community to come together with the rest of the world to try and achieve the same objective for a change.