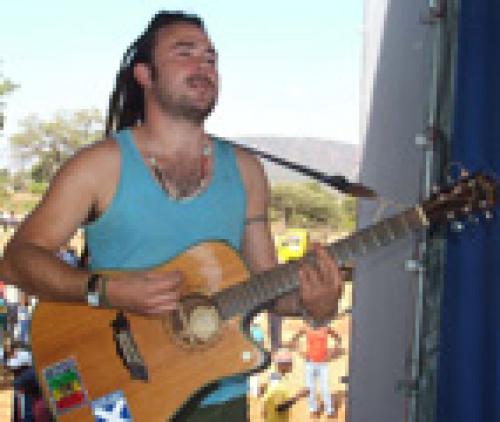 Thitupulwi wishes he could stay in Venda for the rest of his life. He was pictured on stage with Harley and the Rasta Family at the Vuna Awards Celebration of the Thulamela Municipality at Tshaulu recently.

"I wish I could stay here forever"

FONDWE – Fraser McNeil, a 27-year-old Scottish student from Glasgow, wishes he could stay in Venda for the rest of his life.

Fraser is in Venda to conduct research for his PhD in Anthropology with the London School of Economics. He has made his home with the Rathogwa family, at a little village of Fondwe, west of Sibasa. The people there have taken him to their hearts and they call him by his Venda name, Thitupulwi (I won’t be moved).

How does Thitupulwi adjust to life in a small rural village, as he comes from a big Scottish city like Glasgow? “Although Scotland is more advanced, I enjoy life in Venda because this is where my heart is. Everyone is so friendly and I enjoy walking around the village meeting them. I just love the beautiful landscape of Venda and I really enjoy eating wild vegetables like delele, vowa and mushidzhi. They have also taught me the Tshivenda language and it has been quite a nice experience to be here.”

His research title, HIV and education through music, has given him the opportunity to meet different people in and around Venda. “I mostly work with older people and at first it was difficult because they could not understand English. I gave myself time to learn Tshivenda and it is now easier to work with the communities because there is no language barrier between us.”

Thitupulwi has gained amazing popularity because of his lead guitar playing skills which have secured him a space with Harley and the Rasta Family, a band for the local king of Venda reggae, Colbert Mukwevho.

“I have been a keen guitarist from an early age. When I heard Colbert Mukwevho’s songs on the radio, I was immediately attracted to his music. Fortunately, he gave me a chance to display my skills in his band. I first recorded with him his album Muthu ndi nne and I again went to studio with him to record his latest offering, Mulovha, namusi na matshelo. I also enjoy perfoming in live shows with him because I enjoythe acclaim from his fans. People enjoy seeing me on my guitar and they always cry for more…”

There is no doubt that Thitupulwi’s heart is in Venda but, sadly, his home is in Scotland. “Heli shango ndi a li funa vhukuma, fhedzi a hu na zwine nda nga ita saizwi ndi tshi tea u humela Scotland nga Khubvumedzi (I love this country so much, but unfortunately I will have to leave for Scotland in September),” he said in fluent Tshivenda.