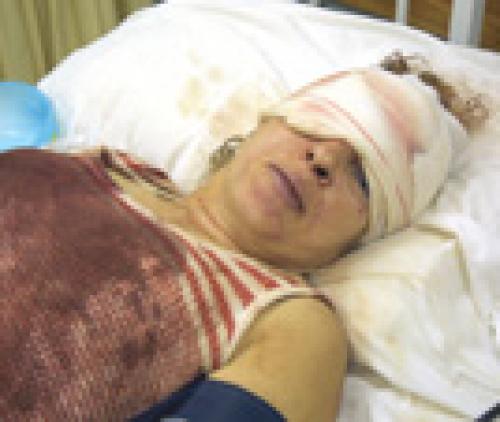 The seriously injured Mrs Brigitte Wiedeck (57), shortly after she and her husband were brutally assaulted by a group of farm attackers.

MAKHADO – Yet another farmer and his wife fell prey to the merciless onslaught of a group of farm attackers on Monday.

A gang of thugs attacked the German-couple shortly after arriving on their farm on the Vondeling Road just outside of Makhado on Monday evening.

The 65-year-old Mr Werner Wiedeck was viciously beaten with a sjambok, which split his ear in half. The attackers also brutally beat his 57-year-old wife, Brigitte, with an iron bar, fracturing her skull. Also injured in the attack was the couple’s trusty farm labourer, Ms Julia Nemukula (43). Just two months shy of one year, this is the second vicious attack on the Wiedeck couple on their farm.

Mr Wiedeck and Ms Nemukula were blindfolded, tied up and gagged. They were then stuffed into Mr Wiedeck’s truck. At that stage, Mr Wiedeck had no indication whether his wife was still alive. All he can remember is the gang of attackers’ constant demand: “Give us money or we kill your wife.”

The seriously injured Mrs Wiedeck was also gagged, blindfolded and tied up. The group of attackers continued beating her, demanding more money. This was after they had taken her wallet, spectacles and cellphone.

At one stage, the brave Mrs Wiedeck realized that the men were going to beat her to death.

She was also starting to suffocate from her own blood, as her scarf had been stuffed in her mouth. She pretended to lose her consciousness, after which the men fled.

Crawling for several meters, the bloodied Mrs Wiedeck reached their garage where she found a knife and cut herself loose. She then freed her husband and Mrs Nemukula. Moments later, help arrived.

All the injured were taken to the Zoutpansberg Medical Clinic. Here, Mrs Wiedeck was stabilized, after which she was transferred to the Medi-Clinic in Polokwane. After a six-hour-long operation on Tuesday, news came that Mrs Wiedeck had lost sight in her one eye and that the eye might have to be removed. It was also too early to know whether Mrs Wiedeck had sustained brain damage.

The attack is one of several farm attacks in the area over the last year. These saw many farmers and their family members injured or killed. The latest farm attack once again brought to the fore the police’s apparent inability to bring these perpetrators to justice. In many of these attacks, such as the attack and murder of the 66-year-old Mr Martin Armitage from the farm Melkhoutkopjes in October last year, the police have made little if any progress in their investigation. In the meantime, members of the local farming community condemned the attack, warning that, should these attacks continue, they will have to take the law into their own hands.

At the time of going to press the police had yet to confirm whether any suspects in Monday’s attack had been arrested. It is speculated that the attackers might be from neighbouring Zimbabwe.