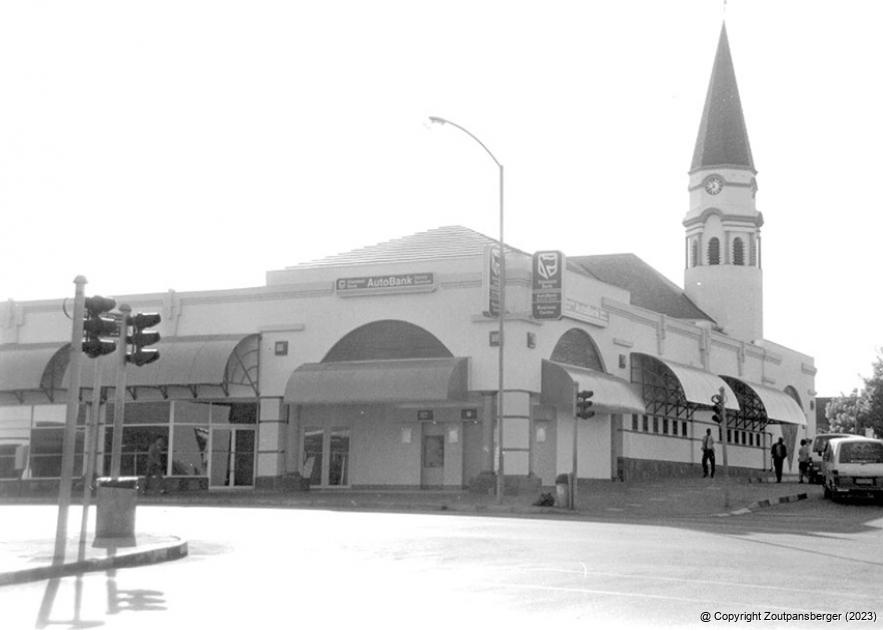 In 1999, part of the branch moved into the building in Krogh Street adjacent to the Church of the Vow.

A little more than 100 years ago, on 3 September 1919, the doors of Standard Bank’s branch opened in Louis Trichardt. Although it was not the first bank in town, it was the first fully commercial bank to explore business opportunities north of the then Pietersburg.

Standard Bank’s history dates to October 1862, when the bank was incorporated and registered as a limited-liability company. The first branch opened in Port Elizabeth in January 1863, which also served as the bank’s headquarters for 23 years. It gradually spread its wings, and by the 1890s it became the leading bank in the country, with branches in neighbouring countries such as southern Rhodesia (Zimbabwe), Portuguese East Africa (Mozambique) and Bechuanaland (Botswana).

The history of banking in the Soutpansberg district dates to the turn of the 20th century. In 1903, Standard Bank investigated the possibility of establishing a branch in the town that was only a few years old at the time. The Pietersburg branch was already up and running and its branch manager thought business opportunities might be found further to the north. One of the branch’s customers, attorney LE Krause, who also had an office in Louis Trichardt, was asked to compile a report on the prospects in town.

Mr Krause’s report was not very favourable and a decision to expand the business was put off for a couple of years. A moratorium on the establishment of new branches when World War I broke out also delayed any expansion plans.

While Standard Bank was contemplating what to do, other banks were more adventurous, or perhaps more subject to political pressure. In September 1906, Major WN Bolton, the Magistrate of Pietersburg, who was responsible for jurisdiction in Louis Trichardt, asked the Law Department to arrange for a banking institution to open a branch in the town. The National Bank of South Africa Ltd was approached but was not keen to do so at first. A year later it was announced that a branch of this bank would open, with Mr FWC Bell as manager.

The laws governing banks at the time seemed to have favoured the National Bank, as all other banks were required to pay an exorbitant licensing fee of £150 per branch per annum. The National Bank has its roots in De Nationale Bank der Zuid-Afrikaansche Republiek Beperk (National Bank of the South African Republic Limited), which was registered in Pretoria during early 1891 and opened for business on 5 April of the same year. Shortly after the Second Anglo-Boer War ended in 1902, the name was changed to the National Bank of South Africa Limited.

Even the Transvaal government’s backing did not help the bank and in April 1908 the branch in Louis Trichardt closed. The town had to wait more than four years for a local bank to open. On 30 August 1912, the Natal Bank opened a branch in town. This bank was subsequently amalgamated with the National Bank, along with other banks, such as the National Bank of the Orange River Colony. This bank later became Barclays Bank and today we know it as First National Bank (FNB).

Louis Trichardt gets its bank

When World War I finally ended in November 1918, the time was ripe for Standard Bank to revisit its expansion plans. In December 1918, the branch manager of Standard Bank in Pietersburg wrote that “the time has now come for the Bank to establish a branch at this town.” A month later, in January 1919, he visited the town and reported back on the prospects.

Louis Trichardt at that stage had about 175 buildings, with a white population of roughly 500. “There are three large white stores in Louis Trichardt, two fairly large hotels, two garages, a mill, two butcher shops and a pharmacy run by white men. There are twenty-three Indian traders in the town, one or two of whom are well off,” he wrote in his report.

The first challenge was to find suitable premises for the new branch. Numerous options were considered, but eventually it was decided to lease premises from Mr Nicholas van Breda for £66 per annum. Exactly where this building was, is not certain, but from the archive photo it looks as if it was in the then Trichardt Street (now Songozwi Street). The building was situated where the current Noor Centre is (across the road from where Edgars is). The first manager was Mr AC Fairlie.

In 1921, the branch moved to the premises formerly used by the National Bank, still in Trichardt Street. The owner of the building was Mr A Abramowitz. The National Bank moved to a new building on the corner of Krogh and Trichardt Street. Standard Bank’s new premises were slightly bigger than what they had previously, with a banking hall, manager’s room, strong room and an officer’s bedroom.

The staff did not seem to be very content with these premises and complained about the safety and lack of light upon entering the building. It also smelt very bad. “No one can live on the premises as they are so damp, and until all the windows and doors are opened, the stench is unbearable. Rain comes in through various places, the ceiling boards are peeling and the floorboards rotting,” recorded a 1930 letter.

In April 1931, the decision was made to look for a suitable site on which new premises could be erected. Two sites, at the intersection of Krogh and Trichardt Street, were identified for possible purchase, namely that of Mr Abramowitz and Mr Suliman’s widow. A deal could not be concluded and, instead, the existing landlord offered to upgrade the bank premises. The reconstruction of the premises was completed by August 1932.

During the 1930s, the region was served by two banks, Standard Bank and Barclays Bank. Barclays Bank had a larger clientele in town, but the accounts of the farming community were evenly distributed between the two banks.

In 1947, Standard Bank had clearly outgrown its premises and started looking around for property centrally situated in town. The first option was to convince the landlord, Mr NS Erleich, to enlarge the office space. Seemingly this did not happen and prior to 1952, when the lease period was about to expire, Standard Bank rather opted to buy a site and build new offices. An option came up to buy an empty site in Krogh Street for £7 500. The site was ideally situated between the municipal building and the post office.

The new building was designed by JET Day of (then) Pietersburg and the contractor was WM Pattison (Pty) Ltd. The tender amount was £14 124. In March 1953, the relocated branch was officially opened, and a landmark was established that served the region for the next 54 years.

The 1960s and 1970s saw the influx of some new names in banking circles, such as Volkskas (1961) and Trust Bank in 1967. Standard Bank focused on the farming community, which also made it susceptible to climatic conditions, and during periods of extreme drought, business was tough.

The district remained a predominantly agricultural area during the 1980s and large parts of the district were intensively cultivated with tropical fruit, vegetables, tea and coffee. In addition to cattle farming, commercial game farming was growing in importance. The town’s close links with Venda continued during the 1980s and it was expected that, in terms of the government’s new decentralisation plan, the role of border towns such as Louis Trichardt would expand.

By the early 1980s, Standard Bank’s premises in Krogh Street had become too small. The building, originally designed to accommodate a staff of 33, housed 31 staff members in 1982 while public space was often congested.

After considering its options, Standard Bank decided to enlarge the branch premises. As the existing site was too small for further development, the bank bought the piece of land behind the branch in 1982 from the Louis Trichardt municipality for R50 000. The site, part of Erf no 291, measured 205,36m². The bank instructed the architects Moolman, Van der Walt, Vlok & Van der Westhuizen, to prepare plans for the proposed extension, estimated to cost R530 000. Following a call for tenders, the bank accepted the tender submitted by Konstruksie 2000 (Pty) Ltd for R456 512,67.

Standard Bank's next big move came in 1999. The Dutch Reformed Church (Haantjiekerk) in Louis Trichardt decided to develop part of its site around 1997. The piece of property bordering Krogh and Erasmus streets was earmarked for business development. The estimated cost of building a business complex was R1,5 million. Standard Bank agreed to be the anchor tenant in this new building.

On 26 August 1999, the building was officially handed over by the contractor, ICR Construction, and a month later a section of the bank’s staff could start moving in. The building next to the post office still housed the main branch, but the business centre was moved to the new building. The design of the building was such that it complemented the adjacent Church of the Vow.

In 2016, the Masingita Group of Companies acquired the Makhado Crossing Mall, situated next to the busy N1 on the turn-off to Thohoyandou. The new owners planned on a major revamp of the centre, accommodating a large number of national retail stores. Standard Bank was invited to be part of this development. Construction work was completed in November 2019 and Standard Bank’s new branch opened midway through November.

“This centenary celebration is testament to the ability of the Standard Bank business to withstand the test of time. South Africa has faced challenges over the years, and we have been able to build a resilient business that continues to empower individuals and drive growth across the continent,” said Standard Bank in a press release last week to mark this historic event.

The Standard Bank branch in Louis Trichardt in the early 1920s.

A photo of the branch in Krogh Street, shortly after it moved there in 1953.

A photo of the Krogh Street branch taken in 1985.